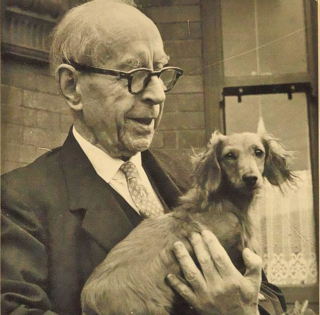 Pádraig Ó Siochfhradha, writer under the pseudonym An Seabhac and promoter of the Irish language, is born in the Gaeltacht near Dingle, County Kerry on March 10, 1883. His brother, Mícheál Ó Siochfhradha is also a writer, teacher, and Irish language storyteller.

Ó Siochfhradha becomes an organiser for Conradh na Gaeilge, cycling all over the countryside to set up branches and promote the Irish language. As a writer, he takes the pen-name An Seabhac, the Hawk, writing books including An Baile Seo Gainne (1913) and Jimín Mháire Thaidhg (1921), both of which draw on his Dingle youth and are later published in one volume as Seoda an tSeabhaic (1974).

Ó Siochfhradha is a prominent and influential figure of early 20th century Irish culture, a key populariser of the Irish Revival. He is an author, storyteller, folklorist, activist and politician.

Ó Siochfhradha’s nickname is thought to be a consequence of his years as a travelling teacher, when he adopts it as a pseudonym for the writing of his most famous book Jimín Mháire Thaidhg. This book, known in its English translation as Jimeen, is a fictionalised account of life growing up in the country, which follows the tribulations and misadventures of a young boy who cannot stay out of trouble.

Ó Siochfhradha works as a teacher from 1910 until 1922 in Kildare and in the Fermoy region of Kerry. He also works as an editor of The Light, a bilingual magazine which lasts six years, from 1907 to 1913. He is a member of Conradh na Gaeilge from early in his life and a frequent member of the League of Employment, which is an outgrowth of Conradh na Gaeilge. In 1911, a resolution, proposed by him and a colleague, is adopted that helps set the agenda for the ongoing revival of the Irish language. The proposal is to teach Irish to children of secondary school age as a living language rather than an antique one. This strategy persists to the present day.

Ó Siochfhradha becomes an active organiser for the Irish Volunteers in 1913 and is imprisoned three times for his activities. He spends time in Durham Prison in England and on Bere Island, County Cork.

In 1922 Ó Siochfhradha moves to Dublin under the auspices of the Department of Education. It is around this time that he is thought to have taken up residence in 119 Morehampton Road, Donnybrook, where he remains for the rest of his life. He continues to stay active in a large number of writing and political projects. He is secretary to the Irish Manuscripts Commission from October 1928 to October 1932.

During the Irish Civil War it is said Ó Siochfhradha does his best to reconcile the opposing sides of the conflict. His political sympathies are primarily republican and he spends a great deal of energy in the 1920s establishing Irish-speaking schools in Dublin. He is a member of Seanad Éireann from 1946–1948, 1951–1954 and 1957–1964, being personally nominated by his friend Taoiseach Éamon de Valera, on each occasion.

Ó Siochfhradha dies on November 19, 1964. His personal papers are on loan to Tralee Library and his archive has been digitised and stored by the University of Limerick.