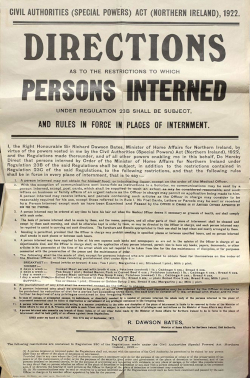 At the start of the twentieth century, the people of Ireland are divided into two mutually hostile factions. Nationalists, the much larger group, are mostly Roman Catholic, identify primarily as Irish, and want some form of Irish home rule or independence from Britain. Unionists, the smaller group, concentrates primarily in the province of Ulster, are mostly Protestant, identify primarily as British (although many see themselves as Irish and British), and are committed to remaining within the United Kingdom.

Partition is formally established with the Government of Ireland Act 1920. This also establishes the Parliament of Northern Ireland, which comes into being the following year. Partition is followed by high levels of inter-communal violence, especially in Belfast. The Irish Republican Army (IRA), although it spends most of these years fighting in the Irish Civil War, aims to use armed force to end partition and compel the United Kingdom to withdraw sovereignty from Northern Ireland.

The Act is presented as being necessary to re-establish peace and law and order in Northern Ireland, and enables the government to “take all such steps and issue all such orders as may be necessary for preserving the peace and maintaining order,” although it is specified that the ordinary course of law should be interfered with as little as possible. Because it is presented as emergency legislation, the Act is initially current only for one year and has to be renewed annually. In 1928, however, it is renewed for five years and when this period expires in 1933 the Act is made permanent.

Despite rhetoric accompanying the Act which asserts that it is for the purpose of restoring public order, its provisions continue to be used for the entire period of the Northern Irish parliament’s existence. Because the Ulster Unionist Party is the only party ever to form a government in this parliament, the Act is used “almost exclusively on the minority population.” Initially, regulations under the Act are used mostly to curb immediate violence and disorder. One of the most controversial of these is internment without trial.

After the troubles of the early 1920s dies down, the provision for internment is not used until the IRA’s Border Campaign of the 1950s, in which several hundred republicans are interned. Following the outbreak of The Troubles in 1968, many within the Protestant community call for the reintroduction of internment. This occurs in 1971 and authorises internment of those suspected to be involved in terrorism. Although there are loyalist as well as republican terrorists at this time, of the 1,981 men interned, only 107 are loyalists. Due to inadequate intelligence-gathering, many of the interned republicans are members of the Official Irish Republican Army rather than the recently formed Provisional Irish Republican Army (PIRA), which is much more heavily involved in terrorist activity at the time.

Internment ends in 1975, but is credited with increasing support and sympathy for the PIRA amongst the Catholic community and outside of Northern Ireland. It helps to create political tensions which culminate in the 1981 Irish Hunger Strike and the death of MP Bobby Sands. Imprisonment under anti-terrorism laws specific to Northern Ireland continue until the 1998 Good Friday Agreement, but these laws require the right to a fair trial be respected.