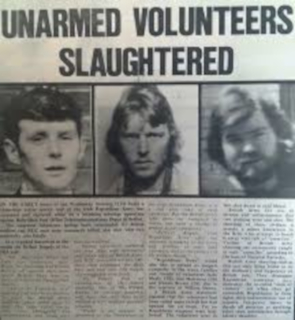 The British Army shoot dead three Provisional Irish Republican Army (PIRA) volunteers and a passing Ulster Volunteer Force (UVF) volunteer at a postal depot on Ballysillan Road, Belfast on June 21, 1978. It is claimed that the PIRA volunteers are about to launch a bomb attack.

William Hanna is walking home with friend David Graham shortly after midnight. He is killed instantly when shooting breaks out between the British army and IRA gunmen. The three other men who die, William Mailey, Dennis Brown and James Mulvenna, are all members of the Provisional IRA.

It is believed the IRA men are challenged as they walk into a trap set up following recent bomb attacks at post office depots. Four petrol bombs are found by the army after the shootings. Three of the bombs are defused while the other is safely detonated.

Local residents, who say more and more soldiers have been seen around the premises in recent weeks, are moved out during the hour-long shooting in which more than 200 rounds are fired.

The Provisional IRA claims its men were not armed. The army does not find any weapons at the scene but reports suggest accomplices carrying guns may have escaped.

Graham, who is not hurt, describes how shooting broke out when he and Hanna are halfway down the lane by the depot, “We hit the ground. The two of us rolled into the bushes and lay there.”

Roadblocks are immediately set up and a man is shot in the arm when he fails to stop. Police ultimately determine he is not connected with the post office attack.