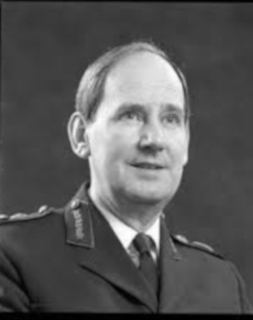 Sir Hugh Norman Annesley, retired Royal Ulster Constabulary (RUC) Chief Constable, is born in Dublin on June 22, 1939. He serves as Chief Constable of the RUC from June 1989 to November 1996.

Annesley is educated at St. Andrew’s Preparatory School and the Avoca School for Boys in Blackrock. He joins the Metropolitan Police in London as a constable in 1958. Rising through the ranks to chief superintendent in 1974, he attends the Special Course (1963), Intermediate Command Course (1971) and Senior Command Course (1975) at the Police Staff College, Bramshill, before transferring to Sussex Police as Assistant Chief Constable (Personnel & Operations) in 1976.

In April 1985, under the new organisational structure, Annesley is appointed Assistant Commissioner Personnel and Training (ACPT) and in 1987 becomes Assistant Commissioner Specialist Operations (ACSO). In 1986 he graduates from the FBI National Executive Institute in the United States. In 1989 he takes up command of the RUC, despite the post being widely expected to go to Geoffrey Dear. He holds the post until his retirement in 1996.