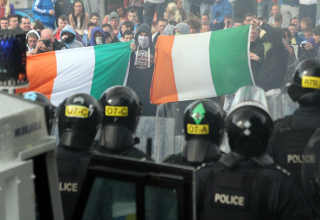 The first incident of the 2012 North Belfast Riots occurs on July 12, 2012 during “The Twelfth” Loyalist celebrations. The sectarian disorder and rioting between loyalists and republicans takes place when rival parades, authorised by the Parades Commission, take place.

Catholic rioting has been common in recent years when the parades are forced through the mostly Irish nationalist Ardoyne in north Belfast. The local Orangemen parade down the predominantly Ulster loyalist Crumlin Road towards the loyalist Woodvale area. Before turning into the Woodvale they are met by Irish republican protesters and a nearby counter-parade organised by the Greater Ardoyne Residents Association (GARC). Nationalists then attack the Police Service of Northern Ireland (PSNI) and the parade with bricks, bottles and petrol bombs.

There is also violence in the Bogside area of Derry, where petrol bombs are thrown at police and a car is set afire. In south and east Belfast there are five arrests for a variety of offences including disorderly behaviour.

Prolonged attacks on the PSNI by Catholics follow the parades with missiles being thrown at police lines. Three cars are hijacked and pushed at police lines with at least one of them being set on fire, and at night ten shots are fired at police by a nationalist gunman who intends to kill police officers. On July 18, 2012, a 47-year-old man is charged with attempted murder of the police officers. The PSNI blames the violence on “thugs” and makes a further 26 arrests across Northern Ireland relating to the trouble.

In another incident during a different parade, a Shankill Road-based loyalist band “The Young Conway Volunteers” is filmed by a Sinn Féin activist playing The Famine Song outside St. Patricks Catholic Church in Ardoyne. The activist filming the incident is attacked by band members who try to snatch the phone from him. The incident brings condemnation, with Sinn Féin declaring it “provocative.” Protestant church leaders also condemn the incident as “blatantly sectarian.” It is this incident that is believed to ignite tensions in the area which continue over the next few months.