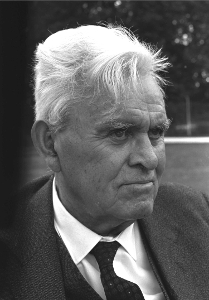 Daniel “Dan” Breen, volunteer in the Irish Republican Army (IRA) during the Irish War of Independence and the Irish Civil War, is born in Grange, Donohill parish, County Tipperary, on August 11, 1894. In later years, he is a Fianna Fáil politician.

Breen’s father dies when he is six, leaving the family very poor. He is educated locally before becoming a plasterer and later a linesman on the Great Southern Railways.

Breen is sworn into the Irish Republican Brotherhood in 1912 and the Irish Volunteers in 1914. On January 21, 1919, the day the First Dáil meets in Dublin, Breen takes part in the Soloheadbeg Ambush. The ambush party of eight men, led by Seán Treacy, attacks two Royal Irish Constabulary (RIC) men who are escorting explosives to a quarry. The two policemen, James McDonnell and Patrick O’Connell, are fatally shot during the incident. The ambush is considered to be the first incident of the Irish War of Independence.

During the conflict, the British put a £1,000 price on Breen’s head, which is later increased to £10,000. He quickly establishes himself as a leader within the Irish Republican Army. He is known for his courage. On May 13, 1919 he helps rescue his comrade Seán Hogan at gunpoint from a heavily guarded train at Knocklong station in County Limerick. Breen, who is wounded, remembers how the battalion is “vehemently denounced as a cold-blooded assassins” and roundly condemned by the Catholic Church. After the fight, Treacy, Séumas Robinson, and Breen meet Michael Collins in Dublin, where they are told to make themselves scarce although they do not necessarily agree.

Breen and Sean Treacy shoot their way out through a British military cordon in the northern suburb of Drumcondra (Fernside). They escape, only for Treacy to be killed the next day. Breen is shot at least four times, twice in the lung.

The British reaction is to make Tipperary a “Special Military Area,” with curfews and travel permits. Volunteer GHQ authorises entrerprising attacks on barracks. The British policy forces Breen and Treacy to retreat to Dublin. They join Michael Collins’ Squad of assassins, later known as the Dublin Guard, and Dublin becomes the centre of the war.

Breen is present in December 1919 at the ambush in Ashtown beside Phoenix Park in Dublin where Martin Savage is killed while trying to assassinate the Lord Lieutenant of Ireland, Viscount John French. The IRA hides behind hedges and a dungheap as the convoy of vehicles drives past. They have been instructed to ignore the first car but this contains their target, Lord French. Their roadblock fails as a policeman removes the horse and cart intended to stop the car.

Breen utterly rejects the Anglo-Irish Treaty, which makes him, like many others, angry and embittered. In the June 1922 elections Breen is nominated as a candidate by both the pro- and anti-Treaty sides, but is not elected.

Breen is elected to Dáil Éireann at the 1923 general election as a Republican anti-Treaty Teachta Dála (TD) for the Tipperary constituency. Following the Anglo-Irish Treaty, Breen joins the Anti-Treaty IRA in the civil war, fighting against those of his former comrades in arms who support the Treaty. He is arrested by the National Army of the Irish Free State and interned at Limerick Prison. He spends two months there before going on hunger strike for six days followed by a thirst strike of six days, prompting his release.

Breen writes a best-selling account of his guerrilla days, My Fight for Irish Freedom, in 1924. He represents Tipperary from the fourth Dáil in 1923 as a Republican with Éamon de Valera and Frank Aiken. He is defeated in the June 1927 general election and travels to the United States where he opens a prohibition speakeasy. In 1932 he returns to Ireland and regains his seat as a member of Fianna Fáil in the Dáil at that year’s general election. During World War II he is said to hold largely pro-Axis views. He represents his Tipperary constituency without a break until his retirement at the 1965 election.

Breen dies in Dublin on December 27, 1969 and is buried in Donohill, near his birthplace. His funeral is the largest seen in west Tipperary since that of his close friend and comrade-in-arms Seán Treacy at Kilfeacle in October 1920. An estimated attendance of 10,000 mourners assemble in the tiny hamlet, giving ample testimony to the esteem in which he was held.

Breen is the subject of a 2007 biography Dan Breen and the IRA by Joe Ambrose.