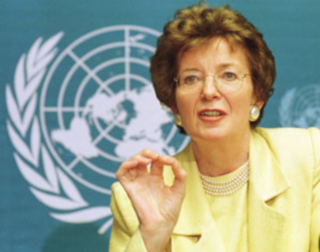 On August 30, 2002, the United Nations High Commissioner for Human Rights, Mary Robinson, criticises the United States for violating human rights in its war on terrorism and of trying to scale back plans to save the world’s poorest people.

Robinson becomes the United Nations High Commissioner for Human Rights on September 12, 1997, following her nomination to the post by Secretary-General of the United Nations Kofi Annan and the endorsement of the General Assembly.

As High Commissioner, Robinson gives priority to implementing the Secretary-General’s reform proposal to integrate human rights into all the activities of the United Nations. During her first year as High Commissioner, she travels to Rwanda, South Africa, Colombia and Cambodia, among other countries. In September 1998, she becomes the first High Commissioner to visit China and signs an agreement with the Government for OHCHR to undertake a wide-ranging technical-cooperation programme to improve human rights in that country. She also strengthens human rights monitoring in such conflict areas as Kosovo in the Federal Republic of Yugoslavia. Her term of office expires in 2002 after sustained pressure from the United States leads her to declare she is no longer able to continue her work.

Educated at Trinity College, Robinson holds law degrees from the King’s Inns in Dublin and from Harvard University. She has been awarded numerous honorary degrees, medals and prizes from universities and humanitarian organizations around the world. In July 2009, she is awarded the Presidential Medal of Freedom, the highest civilian honour awarded by the United States, by U.S. President Barack Obama.