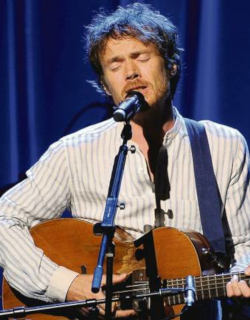 Damien Rice, Irish singer-songwriter, musician and record producer, is born in Dublin on December 7, 1973. He is raised in Celbridge, County Kildare and plays piano, guitar, percussion, and clarinet.

Rice forms the rock band Juniper along with Paul Noonan, Dominic Philips, David Geraghty and Brian Crosby in 1991. They meet while attending Salesian College Celbridge, a secondary school in Celbridge. After touring throughout Ireland, the band releases their debut EP Manna in 1995. They are signed to a six album deal with Polygram Records in 1997.

The band enjoys moderate success with a couple of single releases, but a projected album flounders because of record company politics. After achieving his musical goals with Juniper, Rice becomes frustrated with the artistic compromises required by the record label and he leaves the band in 1998. The remaining members of Juniper go on to become Bell X1.

After leaving the band Rice works as a farmer in Tuscany and busks throughout Europe before returning to Ireland in 2001 and beginning a solo musical career. He gives a demo recording to his second cousin, music producer David Arnold, who then gives Rice a mobile studio. Over the next year he continues to record his album and then embarks on a tour of Ireland with vocalist Lisa Hannigan, New York drummer Tom Osander, cellist Vyvienne Long, guitarist Mark Kelly and Dublin bassist Shane Fitzsimons.

In 2002 Rice’s debut album, O, reachs No. 8 on the UK Albums Chart and remains on the chart for 97 weeks. It also wins the Shortlist Music Prize and generates three top-30 singles in the UK. He releases his second album, 9, in 2006 and his songs have appeared in numerous films and television episodes. After eight years of various collaborations, he releases his third studio album My Favourite Faded Fantasy on October 31, 2014.

Rice’s personal activities include musical contributions to charitable projects such as the Songs for Tibet: The Art of Peace, the Enough Project and the Burma Campaign UK and the U.S. Campaign for Burma to free Burmese democracy movement leader Aung San Suu Kyi.

Rice lives in Carlisle, England for many years before advancing on with his music career where he moves abroad.