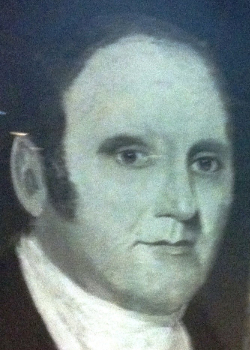 David Fulton, the fourth and final mayor of the Town of Little Rock, Arkansas, before it is incorporated, is born in the Parish of Templemore, County Donegal on January 2, 1771. He serves as mayor from January 1835 through November 1835, his term cut short by the transition of Little Rock from town to city status. Once that occurs in November 1835, a new election has to be held.

Fulton is also proprietor of the Tan Yard, a tanning operation in Little Rock. He later serves as a judge and is appointed as Surveyor General of Public Lands in Arkansas by U.S. President Martin Van Buren in 1838.

Fulton marries Elizabeth Savin in June 1795 in Maryland. She dies in November 1829, while they reside in Alabama. One of their children, William Savin Fulton (for whom Fulton County, Arkansas is named), serves as the fourth Territorial Governor of Arkansas in 1835 and 1836 and is one of Arkansas’ first United States Senators upon statehood in 1836. Fulton is serving as Mayor at the same time his son is Governor.

Fulton comes to Little Rock in 1833. His daughter, Jane Juliet Shall, and her four children come to Little Rock as well. The family makes the move to be nearer to the future governor. The Fultons and Shalls rent the Hinderliter House, now part of Historic Arkansas Museum, in 1834. One of his descendants, Louise Loughborough, is the person who saves the Hinderliter House from destruction and is founder of what is now Historic Arkansas Museum.

In addition to serving as Mayor, Fulton is president of the Anti-Gambling Society and a Pulaski County Justice of the Peace. From 1836 until 1838, he is County Judge of Pulaski County.

David Fulton dies in Little Rock on August 7, 1843 and is buried at Mount Holly Cemetery as are several other members of his family.