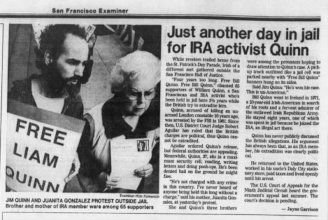 Tibble sees Quinn fleeing from the police after he has been noticed acting suspiciously near a house in which Quinn and fellow members of the Balcombe Street Gang are later found to have been preparing bombs. Tibble chases Quinn on his motorbike and, while attempting to stop him, is fatally shot twice in the chest.

Quinn escapes to Dublin in the aftermath of the shooting and serves a short prison sentence after his arrest for assaulting a police officer there. After his release in 1978 he returns to his hometown of San Francisco but is arrested in 1981 and later extradited to England in February 1988 where he is convicted of murder and jailed for life with a recommended minimum term of 35 years.

Quinn serves eleven years before he is released in April 1999, aged 51, along with the rest of the Balcombe Street Gang, under the terms of the Good Friday Agreement. While with the IRA, Quinn adopts an Irish accent and is tagged with the nickname “Yankee Joe” because of his American origins.