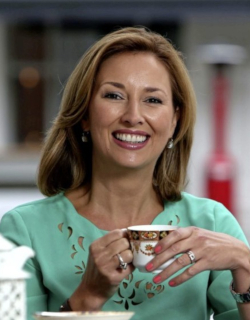 Claire McCollum, newsreader at Downtown Radio in Newtownards, County Down, Northern Ireland, makes headlines herself on February 29, 2000 when she proposes on air to Dungannon and Ulster rugby star Alastair Clarke and he accepts.

McCollum is born on June 5, 1974 in Carrickfergus, County Antrim. An MA graduate at the University of Dundee, she begins her career in broadcasting with Macmillan Media in 1997. She also works as a researcher for CNN and as a newsreader on Downtown Radio.

McCollum joins UTV in March 2000. As well as presenting and reporting for UTV Sport, she has also presented UTV News bulletins and Sport on Sunday.

In February 2009, McCollum announces she is leaving UTV as part of a voluntary redundancy scheme at the station. In an interview with a regional newspaper, she announces her intention to become a freelance broadcast journalist.

Following her departure from UTV, McCollum builds up her portfolio with BBC Northern Ireland. She becomes synonymous with many of Northern Ireland television’s highest profile events. She co-hosts BBC Proms in the Park at Titanic Slipways, the Olympic flame arriving at Belfast City Hall and the Clipper Homecoming in Derry.

McCollum also presents and reports on two series of the popular BBC Northern Ireland consumer programme In Your Corner and covers many major sporting events including the North West 200, Commonwealth Games in Manchester, Northern Ireland’s Football World Cup qualifiers, Tennis Legends in Belfast and the Belfast International Horse Show. She is also a regular presenter on Balmoral Agricultural Show and Children In Need programmes and hosts the second glittering ‘Celebrity Strictly Come Dancing’ extravaganza for Children in Need.

McCollum and Clarke have two children and reside in her hometown of Newtownabbey, County Antrim.