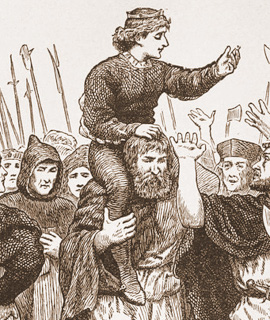 Lambert Simnel, the Yorkist pretender to the throne of England, is crowned King of England as Edward VI in Christ Church Cathedral, Dublin, on May 24, 1487.

Simnel is born around 1477. His real name is not known and contemporary records call him John, not Lambert, and even his surname is suspect. Different sources have different claims of his parentage but he is most definitely of humble origin. At the age of about ten, he is taken as a pupil by an Oxford-trained priest named Richard Simon who apparently decides to become a kingmaker. He tutors the boy in courtly manners and contemporaries describe the boy as handsome. He is taught the necessary etiquette and is well educated by Simon.

Simon notices a striking resemblance between Lambert and the sons of Edward IV, so he initially intends to present Simnel as Richard, Duke of York, son of King Edward IV, the younger of the vanished Princes in the Tower. However, when he hears rumours (at the time false) that the Edward Plantagenet, 17th Earl of Warwick has died during his imprisonment in the Tower of London, he changes his mind. The real Warwick is a boy of about the same age, having been born in 1475, and has a claim to the throne as the son of George Plantagenet, 1st Duke of Clarence, King Edward IV’s executed brother.

Simon spreads a rumour that Warwick has actually escaped from the Tower and is under his guardianship. He gains some support from Yorkists. He takes Simnel to Ireland where there is still support for the Yorkist cause, and presents him to the head of the Irish government, Gerald FitzGerald, 8th Earl of Kildare, Lord Deputy of Ireland. Kildare is willing to support the story and invade England to overthrow King Henry. Simnel is paraded through the streets, carried on the shoulders of “the tallest man of the time,” an individual called D’Arcy of Platten.

On May 24, 1487, Simnel is crowned in Christ Church Cathedral in Dublin as King Edward VI. He is about 10 years old. Lord Kildare collects an army of Irish soldiers under the command of his younger brother, Thomas FitzGerald of Laccagh.

John de la Pole, 1st Earl of Lincoln, formerly the designated successor of his uncle, the late King Richard III, joins the conspiracy against Henry VII. He flees to Burgundy, where Warwick’s aunt Margaret of York, the Dowager Duchess of Burgundy, keeps her court. Lincoln claims that he has taken part in young Warwick’s supposed escape. He also meets Francis Lovell, 1st Viscount Lovell, who had supported a failed Yorkist uprising in 1486. Margaret collects 2,000 Flemish mercenaries and ships them to Ireland under the command of Martin Schwartz, a noted military leader of the time. They arrive in Ireland on May 5. King Henry is informed of this and begins to gather troops.

Simnel’s army, mainly Flemish and Irish troops, lands on Piel Island in the Furness area of Lancashire on June 5, 1487 and are joined by some English supporters. However, most local nobles, with the exception of Sir Thomas Broughton, do not join them. They clash with the King’s army on June 16 at the Battle of Stoke Field in Nottinghamshire, and are defeated. Lincoln and Thomas FitzGerald are killed. Lovell goes missing and there are rumours that he has escaped to Scotland with Sir Thomas Broughton and hidden to avoid retribution. Simons avoids execution due to his priestly status, but is imprisoned for life. Kildare, who had remained in Ireland, is pardoned.

King Henry pardons young Simnel, probably because he recognises that Simnel had merely been a puppet in the hands of adults, and puts him to work in the royal kitchen as a spit-turner. When he grows older, he becomes a falconer. Almost no information about his later life is known. He dies some time between 1525 and 1535. He seems to have married, as he is probably the father of Richard Simnel, a canon of St. Osyth’s Priory in Essex during the reign of Henry VIII.