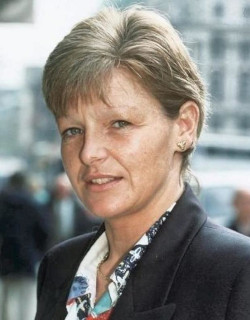 Journalist and crime scene reporter Veronica Guerin is murdered by drug lords in Dublin on June 26, 1996, an event which helped establish the Criminal Assets Bureau (CAB).

After she graduates, her father employs her at his company but, following his death three years later, she changes professions and starts a public relations firm in 1983, which she runs for seven years. In 1983–84, she serves as secretary to the Fianna Fáil group at the New Ireland Forum. She serves as Charles Haughey‘s personal assistant, and becomes a family friend, taking holidays with his children. In 1987 she serves as election agent and party treasurer in Dublin North for Seán Haughey.

In 1990, she changes careers again, switching to journalism as a reporter with The Sunday Business Post and Sunday Tribune, working under editor Damien Kiberd. Craving first-hand information, she pursues a story directly to the source with little regard for her personal safety, to engage those she deems central to a story. This allows her to build close relationships with both the legitimate authorities, such as the Garda Síochána, and the criminals, with both sides respecting her diligence by providing highly detailed information. She also reports on Irish Republican Army activities in the Republic of Ireland.

From 1994 onwards, she begins to write about criminals for the Sunday Independent. Using her accountancy knowledge to trace the proceeds of illegal activity, she uses street names or pseudonyms for organized crime figures to avoid Irish libel laws.

When she begins to cover drug dealers, and gains information from convicted drugs criminal John Traynor, she receives numerous death threats. The first violence against her occurs in October 1994, when two shots are fired into her home after her story on murdered crime kingpin Martin Cahill is published. Guerin dismisses the “warning.” The day after writing an article on Gerry “The Monk” Hutch, on January 30, 1995, she answers her doorbell to a man pointing a revolver at her head. The gunman misses and shoots her in the leg. Regardless, she vows to continue her investigations.

On September 13, 1995, convicted criminal John Gilligan, Traynor’s boss, attacks her when she confronts him about his lavish lifestyle with no source of income. He later calls her at home and threatens to kidnap and rape her son, and kill her if she writes anything about him.

On the evening of June 25, 1996, Gilligan drug gang members Charles Bowden, Brian Meehan, Kieran ‘Muscles’ Concannon, Peter Mitchell and Paul Ward meet at their distribution premises on the Greenmount Industrial Estate. The following day, while driving her red Opel Calibra, Guerin stops at a red traffic light on the Naas Dual Carriageway near Newlands Cross, on the outskirts of Dublin, unaware she is being followed. She is shot six times, fatally, by one of two men sitting on a motorcycle.

About an hour after Guerin is murdered, a meeting takes place in Moore Street, Dublin, between Bowden, Meehan, and Mitchell. Bowden later denies under oath in court that the purpose of the meeting is the disposal of the weapon but rather that it was an excuse to appear in a public setting to place them away from the incident.

At the time of her murder, Traynor is seeking a High Court order against Guerin to prevent her from publishing a book about his involvement in organised crime. Guerin is killed two days before she is due to speak at a Freedom Forum conference in London.

Guerin’s funeral is attended by Ireland’s Taoiseach John Bruton, and the head of the armed forces. It is covered live by Raidió Teilifís Éireann. On July 4, labour unions across Ireland call for a moment of silence in her memory, which is duly observed by people around the country. Guerin is buried in Dardistown Cemetery, County Dublin.