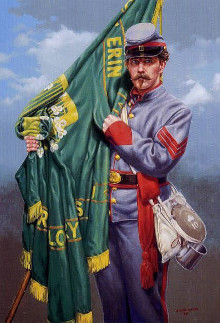 The 10th Tennessee Infantry (Irish) fights at the Battle of Utoy Creek on August 6, 1864 during the American Civil War. Known as the “Bloody Tinth,” it is one of only two Irish Catholic regiments in the Confederate States Army, although their elected officers are mostly Ulster Scots Protestants. They are deployed as sharpshooters through the tough campaigns at Chickamauga, Chattanooga and Atlanta.

The Battle of Utoy Creek is fought August 4–7, 1864, during the Atlanta Campaign of the American Civil War. Major General William Tecumseh Sherman‘s Union armies have partially encircled the city of Atlanta, Georgia, which is being held by Confederate forces under the command of General John Bell Hood. Sherman has at this point adopted a strategy of attacking the railroad lines into Atlanta, hoping to cut off his enemies’ supplies. This is the third direct attack on Confederate positions during the campaign and the effect of success would have ended the siege and won Atlanta on August 6, 1864.

After failing to envelop Hood’s left flank at the Battle of Ezra Church, Sherman still wants to extend his right flank to hit the railroad between East Point and Atlanta. He transfers Maj. Gen. John McAllister Schofield‘s XXIII Corps of the U.S. Army of the Ohio from his left to his right flank and sends him to the north bank of Utoy Creek.

Although Schofield’s troops are at Utoy Creek on August 2, they, along with the XIV Corps, Army of the Cumberland, do not cross until August 4. An initial attack by the Regular Brigade against James Patton Anderson‘s Division CSA of Stephen Dill Lee‘s Corps is unsuccessful. In addition the Confederates dismount a brigade of cavalry, Armstrong’s, in the front of the federals in a deception plan, a feinted attack that is successful in delaying the combined force of the XXIII and XIV Corps USA.

Schofield makes an additional movement to exploit this situation on the morning of August 5. Although initially successful, Schofield has to regroup his forces, which takes the rest of the day. The delay allows the Confederates to strengthen their defenses with an abatis, which slows the Union attack when it restarts on the morning of August 6. The Federals are repulsed with heavy losses by William Brimage Bate‘s division and fail in an attempt to break the main defenses to gain the railroad.

On August 7, the Union troops move toward the Confederate main line skirmishing and extending to their right and entrench. Several attacks are made at Sandtown Road (Campbellton at Adams Park) on August 10 and East Point on August 18. Here US Forces remain, as far south as the Atlanta Christian College, until late August 1864 when the failure of Schofield’s offensive operations convince Sherman to move on the Confederate lines of communication and supply.