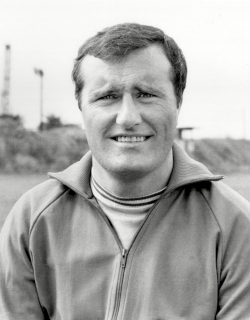 Noel Euchuria Cornelius Cantwell, soccer player and sometime cricketer, dies of cancer on September 8, 2005. Born in Cork, County Cork on February 28, 1932, he is educated at the Roman Catholic Presentation Brothers College there.

Cantwell plays as a full-back for Western Rovers, Cork Athletic F.C., West Ham United F.C. and Manchester United F.C.. While at West Ham, he features in the London XI side that competes in the 1955–58 Inter-Cities Fairs Cup final on May 1, 1958. He captains the Hammers to winning the Division Two championship in the 1957–58 season and thereby leads the club into the top flight for the first time since 1932.

In November 1960, Cantwell joins Manchester United for £29,500 which at the time is a record for a full-back. He helps the club win the 1965 and 1967 league titles and captains United when winning the 1963 FA Cup Final, just as his fellow countryman Johnny Carey had done in United’s previous FA Cup win 15 years earlier. He also serves as Chairman of the Professional Footballers’ Association.

Cantwell wins 36 full International caps for the Republic of Ireland national football team, typically playing at left full-back and on several occasions at centre-forward. He makes his debut against Luxembourg in October 1953 with his final appearance coming away to Turkey in February 1967. He scores 14 goals including 5 from penalties and also captains the Republic on several occasions including a match against England at Wembley Stadium.

In his first managerial role at Coventry City F.C. he has the onerous task of following Jimmy Hill who had taken the club into the Football League First Division for the first time in their history. He narrowly keeps the Sky Blues in the top in his first two seasons before taking them to a sixth-place finish in 1969–70, earning them qualification for the Inter-Cities Fairs Cup, a year before it was replaced by the UEFA Cup.

Cantwell departs from Highfield Road on March 12, 1972 to take charge of the New England Tea Men in the United States, but within seven months is back in English football as manager of Peterborough United F.C.. He helps Peterborough win the Football League Fourth Division title in his first full season as manager, before leaving on May 10, 1977 for a second spell with the Tea Men. This time he spends a year in the United States.

Cantwell returns to Peterborough on November 19, 1986 for a second spell as manager, remaining in this role until he becomes general manager on July 12, 1988. He is general manager at London Road for a year until he quits football to become licensee of the New Inn at Peterborough, where he remains for 10 years until he retires in 1999. He also is landlord of the Bull and Swan in Stamford, Lincolnshire.

Cantwell also plays cricket for Cork Bohemians Cricket Club and Ireland as a left-handed batsman and a right-arm medium bowler. He plays five times for Ireland making his debut in what is his sole first-class match versus Scotland at Edinburgh in 1956, scoring 31 and 17. His last match for Ireland is against Lancashire in July 1959.

Cantwell dies on September 8, 2005 from cancer at the age of 73, leaving a widow and two children. His former teams each hold a minute of silence for him before their next matches.