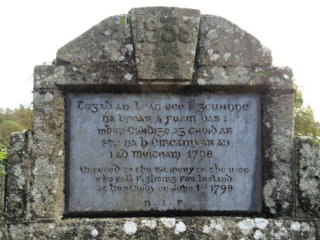 The Battle of Carlow takes place in Carlow, County Carlow on May 25, 1798 when Carlow rebels rise in support of the Irish Rebellion of 1798 which had begun the day before in County Kildare.

The Society of United Irishmen organisation in Carlow, led by a young brogue-maker named Mick Heydon who had taken over the leadership following the arrest of the previous leader, Peter Ivers, who was arrested with several other leading United Irishmen at Oliver Bond‘s house in March of that year, assemble on the night of May 24 and set off at dawn to attack the county town. Picking up more volunteers along the way, their numbers swell to around 1,200 and they march completely unopposed.

The attack on the town is planned to take place simultaneously from four different directions, through the four main streets. All are to converge on Potato Market.

As the various contingents advance, they are unaware that Colonel Mahon of the Ninth Dragoons has the military in the barracks and the town on the highest alert. Their every move is known to him. A strong party of military is stationed in the court house, which is now known as the Deighton Hall, situated immediately to the north of the bridge across the River Burren. Another party with two small cannon are stationed on the bridge. On Graigue bridge, there is an officer’s guard of yeomen. In Dublin Street and to the north, well-armed loyalists fill some large strong houses, but without military support, as the attack is known to be weak from that quarter. Tullow Street is left open and to all appearances undefended against what is expected to be the strongest attack of all. The trap is laid.

When the Rebels enter the town of Carlow they are joined not only by the Catholic inhabitants but also by people who have secretly arrived there during the previous day and night. A crowd of approximately two hundred people break away and march through Tullow Street but when they reach Potato Market their fortunes change.

The forewarned garrison had prepared a deadly ambush, posting men at every window and rooftop. As the rebels relax after their apparently easy victory, the concealed soldiers pour volley after volley of gunfire into the masses of exposed rebels. Taken completely by surprise, the shocked and poorly armed rebels break and flee only to run into another army ambush. The survivors try to escape by breaking through adjoining houses and cabins which are set afire by the pursuing soldiers causing the deaths of 200 of the inhabitants.

In the meantime, the County Laois Rebels, on their way to aid the Carlow rebels having heard mixed reports of the battle and hearing the fate of their comrades, decide it is too late to help and change their plans. They are led by men called Redmond and Brennan. They proceed to Ballickmoyler instead, some miles outside Carlow in County Laois and there they set fire to many loyalist houses and attack the home of John Whitty, a Protestant clergyman. Twenty-one of the Rebels are killed in the fray but despite this they eventually overcome the loyalist inhabitants.

An estimated 500 rebels and civilians are killed in the streets of the town with no reported losses to the military. Another 150 are executed in the repression over the following ten days. A local man who becomes known as “Paddy the Pointer” is reported to have helped to identify escaped rebels to the military by riding around the town and pointing them out.

A memorial, pictured above, is located at Carlow-Graigue, or Graigue-Cullen as it is now known, where remains of many of those who perished that day were flung into a mass grave.