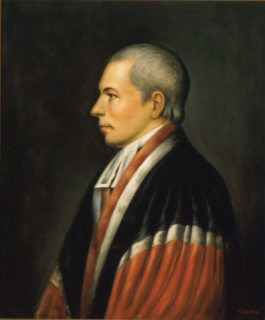 William Paterson, Irish-born American jurist, one of the framers of the Constitution of the United States, United States senator (1789–90), and governor of New Jersey (1790–93), dies in Albany, New York on September 9, 1806. He also serves as an Associate Justice of the Supreme Court of the United States from 1793 to 1806.

Paterson is born on December 24, 1745 in County Antrim, to Richard Paterson, an Ulster Protestant. He immigrates with his parents to New Castle, Pennsylvania in 1747, eventually settling in Princeton, New Jersey. At the age of 14, he begins college at the College of New Jersey (now Princeton University), graduating in 1763. After graduating, he studies law with the prominent lawyer Richard Stockton and is admitted to the bar in 1768. He also stays connected to his alma mater and helps found the Cliosophic Society with Aaron Burr.

Paterson serves twice in the Provincial Congress of New Jersey (1775–76), is a delegate to the state constitutional convention (1776), and from 1776 to 1783 is attorney general of New Jersey.

In 1787 Paterson heads the New Jersey delegation to the federal Constitutional Convention, where he plays a leading role in the opposition of the small states to representation according to population in the federal legislature. As an alternative to James Madison‘s large-state Virginia Plan, he submits the small-state New Jersey Plan, also called the Paterson Plan, which advocates an equal vote for all states. The issue is finally resolved with the compromise embodied in the bicameral Congress —representation by population in the House of Representatives, and equality of states in the Senate.

Paterson is instrumental in securing ratification of the final document in New Jersey and is elected one of the state’s first two U.S. senators. He resigns his seat in 1790 and serves as governor of New Jersey until 1793, when he is named an associate justice of the United States Supreme Court.

On September 9, 1806, Paterson, aged 60, dies from the lingering effects of a coach accident suffered in 1803 while on circuit court duty in New Jersey. He is on his way to the spa at Ballston Spa, New York, to “take the waters”, when he dies at the Manor of Rensselaerswyck home of his daughter, Cornelia, and son-in-law, Stephen Van RensselaerStephen Van Rensselaer, in Albany, New York. He is laid to rest in the Van Renssalaer family vault. When the city acquires the property, his remains are relocated to Albany Rural Cemetery in Albany County, New York. Also buried there are Associate Justice Rufus W. Peckham and President Chester A. Arthur.