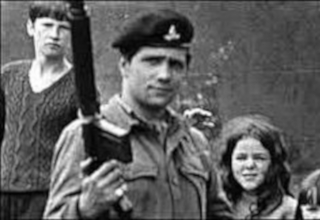 Robert George Curtis, officially the first military fatality during the Troubles in Northern Ireland, is killed by the Provisional Irish Republican Army (IRA) on February 6, 1971, becoming the first British soldier to die in the line of duty in Ireland since 1921. The gunman responsible is believed to be Provisional IRA member Billy Reid, who is killed later that year in a gunfight. A total of 705 British soldiers are killed during the Troubles.

156 (Inkerman) Battery, 94 Locating Regiment, Royal Artillery is deployed to Northern Ireland on January 5, 1971 under the command of the 32nd Regiment Royal Artillery. During the first week of February 1971, there is major violence in many Irish republican areas of Belfast when the British Army launches a series of searches for IRA arms. Rioting in the republican area of the New Lodge escalates and reinforcements are summoned. 156 Battery is ordered into the area. Because mobs of rioters are threatening the bordering unionist Tiger’s Bay area, the Battery is deployed along the interface to block them.

A large crowd gathers at the junction of New Lodge Road and Lepper Street. A troop of soldiers from 156 Battery, including Gunner Rob Curtis, are deployed to disperse the crowd. As the troops move to the junction they are attacked with a barrage of stones and bottles by the mob and deploy in “riot-formation” with shields as protection. Subsequently, a nail bomb is thrown at the troops. In the aftermath of the blast the crowd splits allowing a gunman to fire a long burst of automatic fire from a Sterling submachine gun, probably from the base of Templar House. The crowd then reforms, allowing the gunman to escape. Gunner Curtis is hit by a ricochet which passes through the shoulder opening of his flak jacket, penetrating his heart. He dies almost instantly. Four other troop members are wounded, one seriously.

Curtis is, at the time of his death, 20 years old and married for just over a year. His wife is expecting their first child and had just informed him in a letter that he was to become a father. He is laid to rest in West Road Cemetery, Newcastle upon Tyne, England. He is the first officially recognised fatality that the army suffers as a direct result of IRA actions. Unofficially 21 other military personnel died or were killed before his death. On the morning after his death Sir James Chichester-Clark, then Prime Minister of Northern Ireland, announces that “Northern Ireland is at war with the Irish Republican Army Provisionals.”

Some sources claim the shots were fired from a Thompson submachine gun, but some eyewitnesses are sure that it was a Sterling submachine gun that was fired. Curtis’s wife is later compensated to the sum of £6500 together with £1500 for her daughter. His daughter is married wearing her father’s wedding ring and later names her son Robert in honour of his grandfather.

Branagh is the middle of three children of working-class Protestant parents Frances (née Harper) and William Branagh, a plumber and joiner who runs a company that specialises in fitting partitions and suspended ceilings. He lives in the Tiger’s Bay area of the city and is educated at Grove Primary School.

At the age of nine, Branagh moves with his family to Reading, Berkshire, England, to escape the Troubles. He is educated at Whiteknights Primary School, then Meadway School, Tilehurst, where he appears in school productions such as Toad of Toad Hall and Oh, What a Lovely War!. He attends the amateur Reading Cine & Video Society (now called Reading Film & Video Makers) as a member and is a keen member of Progress Theatre for whom he is now the patron. He goes on to train at the Royal Academy of Dramatic Art in London and in 2015 succeeds Richard Attenborough as its president.

Branagh narrates the series Cold War (1998), the BBC documentary miniseries Walking with Dinosaurs (1999), Walking with Beasts (2001) and Walking with Monsters (2005). He has been nominated for five Academy Awards, five Golden Globe Awards, and has won three BAFTAs, and an Emmy Award. He is appointed a Knight Bachelor in the 2012 Birthday Honours and is knighted on November 9, 2012. He is awarded the Freedom of the City of his native city of Belfast in January 2018. 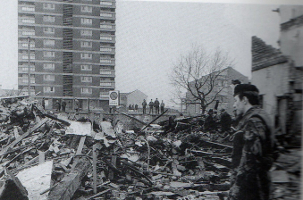 The Ulster Volunteer Force (UVF) explodes a bomb at McGurk’s Bar, an Irish Catholic-owned pub in Belfast, on December 4, 1971, killing fifteen Catholic civilians including two children and wounding seventeen others. This is the highest death toll from a single incident in Belfast during the Troubles. The bombing sparks a series of tit-for-tat bombings and shootings by loyalists and republicans, which help make 1972 the bloodiest year of the conflict.

On the evening of Saturday, December 4, 1971, a four-man UVF team meets in the Shankill area of Belfast and are ordered to bomb a pub on North Queen Street. According to the only convicted bomber, Robert Campbell, they are told not to return until the job is done. Campbell says that their target had not been McGurk’s, but another pub nearby. It is believed this is a pub called The Gem, which is allegedly linked to the Official Irish Republican Army (IRA). The 50-pound bomb is disguised as a brown parcel, which they place in a car and drive to their target. Campbell says they stop near The Gem at about 7:30 PM, but are unable to gain access to it because there are security guards outside. After waiting for almost an hour, they drive a short distance to McGurk’s. At about 8:45 PM, one of them places the bomb in the porch entrance on Great George’s Street and rushes back to the car. It explodes just moments after they drive off. Campbell implies that McGurk’s had been chosen only because it was “the nearest Catholic pub.”

The blast causes the building to collapse. Bystanders immediately rush to free the dead and wounded from the rubble. Firefighters, paramedics, police, and soldiers are quickly on the scene. Fifteen Catholic civilians are killed, including two children, and an additional seventeen are wounded. The rescue effort lasts many hours.

Within two hours of the blast, a sectarian clash erupts nearby at the New Lodge–Tiger’s Bay interface. The British Army and Royal Ulster Constabulary (RUC) move in and a gun battle develops. A British Army officer, Major Jeremy Snow, is shot by the IRA on New Lodge Road and dies of his wounds on December 8. Two RUC officers and five civilians are also wounded by gunfire. Eventually, five companies of troops are sent into the district and they search almost 50 houses.

Meanwhile, the UVF team has driven to a nearby pickup point where they dump their car. They walk to the area of St. Anne’s Cathedral and are picked up by another car. They are driven back to the Shankill area and meet the man who had ordered the attack in an Orange Hall, telling him that “the job has been done.”

Among those killed are Philomena and Maria McGurk, wife and 12-year-old daughter of pub owner Patrick McGurk. Patrick and his three sons are seriously injured. Shortly after the attack, McGurk appears on television calling for no retaliation, “It doesn’t matter who planted the bomb. What’s done can’t be undone. I’ve been trying to keep bitterness out of it.”

In March 1976, the RUC receives intelligence that links UVF member Robert Campbell and four others to the McGurk’s bombing. Campbell is arrested on July 27, 1977 and held at Castlereagh RUC base. He admits his part in the bombing but refuses to name the others.

On July 29, 1977, Campbell is charged with 15 counts of murder and 17 counts of attempted murder. On September 6, 1978, he pleads guilty to all charges and receives life imprisonment with “a recommendation to serve no less than 20 years,” in part for a separate conviction for the murder of a Protestant delivery driver in 1976. He is the only person to have been charged for the bombing. He eventually serves fifteen years in prison and is released on September 9, 1993.