The last barge on the Grand Canal makes its final journey to Limerick on May 27, 1960 carrying a cargo of Guinness. The impressive broad-beamed barge carrying the number 51M casts off from Dublin‘s James Street Harbour marking the end of a way of life on the canal which has existed since the construction of the waterway in the early 1800s.

For some 160 years freight barges ply the canal bringing cargoes to and from Dublin, Limerick, Waterford and canal-side villages across the midlands from Sallins to Shannon Harbour. The spine of the waterways system is the Grand Canal which crosses mid-Kildare in a southwest direction from Hazelhatch to west of Ticknevin.

Typically a crew of four men live on the boats on voyages which can take up to four days from Dublin to Limerick. The crew is comprised of the Master or skipper, the Engineman, Deck man and Greaser. Although a seemingly idyllic job the boatmen worked hard in all weather, sometimes sailing through the night.

The canal cargo business is always under pressure from the railways but tonnages of bulk goods (barrels of porter, turf, coal, sand, gravel, and grain and flour) where speed is not important remain high. Competition from the motor lorry in the 1920s and 1930s causes tonnages to fall severely. The canals get a brief respite during the Emergency years (1939-45) when they are pressed into service to transport turf from the Bog of Allen to Dublin city where it is stored in massive clamps at Phoenix Park.

As part of a rationalisation in the post-war decades, the Government brings out the shareholders of the Grand Canal Company and amalgamates its operations with Córas Iompair Éireann (CIÉ), a newly formed semi-state entity with a mandate to take over all transport services in Ireland. CIÉ has enough on its hands trying to keep the railway system viable and it is clear that the days of canal freight are numbered. In November 1959 CIÉ announces that the Grand Canal will close to cargo boats on December 31 of that year.

The Guinness brewery asks for a stay of a few months so it can complete alternative arrangements for road deliveries. The definitive final voyage from Dublin begins on the afternoon of May 27, 1960 when 51M casts off at James Street Harbour bound for the Guinness depot in Limerick.

51M escapes the wrecker’s torch and is kept in service though a succession of canal authorities as a maintenance boat for the canals. In May 2010, fifty years after it carried the last commercial cargo from Dublin to Limerick, the canal boat 51M retraces its historic journey, once again carrying a number of original Guinness casks as its cargo. 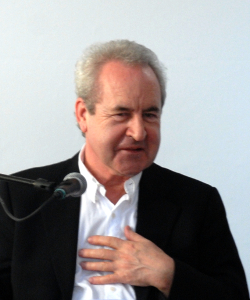 Irish author John Banville beats higher profile favorites to become the surprise winner of Britain‘s prestigious Booker Prize for fiction on October 11, 2005. His 14th novel, The Sea, is described by the judges as “a masterly study of grief, memory, and love recollected.”

Banville wins the Booker Prize in 2005 after having been on the short list in 1989. His later work is contending with novels by Kazuo Ishiguro, Julian Barnes, Ali Smith, Sebastian Barry and Zadie Smith. The judges vote is split between Banville and Ishiguro, and Chairman of Judges John Sutherland casts the winning vote in favour of Banville.

Earlier in the year Sutherland had written approvingly of Ian McEwan‘s novel Saturday. Banville strongly criticizes the work in The New York Review of Books. Banville later admits that, upon reading Sutherland’s letter in response to his review, he had thought, “Well, I can kiss the Booker goodbye. I have not been the most popular person in London literary circles over the past half-year. And I think it was very large of Sutherland to cast the winning vote in my favour.”

Banville is noted for having written a letter in 1981 to The Guardian requesting that the Booker Prize, for which he is “runner-up to the shortlist of contenders”, be given to him so that he can use the money to buy every copy of the longlisted books in Ireland and donate them to libraries, “thus ensuring that the books not only are bought but also read — surely a unique occurrence.”

When his The Book of Evidence is shortlisted for the 1989 Booker Prize, Banville says a friend, whom he describes as “a gentleman of the turf,” instructed him “to bet on the other five shortlistees, saying it was a sure thing, since if I won the prize I would have the prize-money, and if I lost one of the others would win…But the thing baffled me and I never placed the bets. I doubt I’ll be visiting Ladbrokes any time soon.”

Banville has received numerous other awards in his career. His novel The Book of Evidence is shortlisted for the Booker Prize and wins the Guinness Peat Aviation award in 1989. In 2011, Banville is awarded the Franz Kafka Prize, while 2013 brings both the Irish PEN Award and the Austrian State Prize for European Literature. In 2014 he wins the Prince of Asturias Award in Letters. He is considered a contender for the Nobel Prize in Literature. He is elected a Fellow of the Royal Society of Literature in 2007.