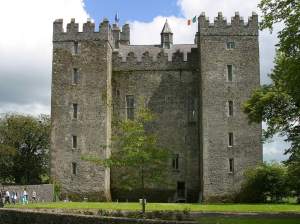 John Comyn is elected Archbishop of Dublin and consecrated by the pope at Velletri on March 21, 1181. He is the first Englishman to be appointed to an Irish see.

He is chaplain to King Henry II of England and on his “urgent” recommendation is elected Archbishop of Dublin following the death of St. Laurence O’Toole in 1180. He has been a Benedictine monk at the Evesham Abbey.

In 1181, some of the clergy of Dublin assemble at Evesham and Comyn is elected to the archbishopric of Dublin. He is not then a priest, but is subsequently ordained such later in the year at Velletri and on Palm Sunday, March 21, is consecrated archbishop by Pope Lucius III. The following year the pope grants him manors and lands in and around Dublin, which subsequently form the Manor of St. Sepulchre which remains under the authority of the Archbishop of Dublin until the 19th century. The pope also, in an effort to protect the Dublin archbishopric from claims from Canterbury, extends certain privileges to Comyn, which intensifies the rivalry between the sees of Dublin and Armagh for the Primacy of Ireland.

Comyn waits three years before visiting Ireland, until he is sent there by King Henry to prepare the reception of his son, Prince John. The king grants him lands and privileges which make him a Lord of Parliament. After his arrival in Ireland, John grants Comyn the Bishopric of Glendalough, although Comyn never has an opportunity to take this up in his lifetime. Under Pope Urban III, Comyn carries out a number of reforms of the Irish church to bring it into line with the church in England and in continental Europe.

In 1189, Archbishop Comyn assists at the coronation of King Richard I. The following year he demolishes the old parish church of St. Patrick, south of Dublin. He then erects a new building, next to his Palace of St. Sepulchre, which he elevates to the status of a collegiate church and later becomes St. Patrick’s Cathedral. This enables him to rule in his own Liberty, without the interference of mayor and citizens. Around this time he enlarges the choir of Christ Church Cathedral.

Prince John grants Comyn further legal rights throughout the country of Ireland, while Comyn also receives the church and lands of All Hallows to the northeast of Dublin. Between Lusk and Swords he founds the convent of Grace Dieu Abbey, which later becomes wealthy through grants from the Anglo-Norman prelates and magnates. However, when Hamo de Valoniis is appointed Justiciar of Ireland he seizes some of these lands for the treasury and himself. A dispute arises which causes Comyn to flee for his own safety to Normandy. Comyn appeals to Pope Innocent III, who settles the dispute, but John is angered by the actions of Comyn and does not reconcile himself with him until 1206.

Comyn dies six years later on October 25, 1212 and is buried in Christ Church Cathedral, where a marble monument is erected to his memory. Two years later William Piro, Bishop of Glendalough, dies whereupon the union of the sees granted by King John takes place.