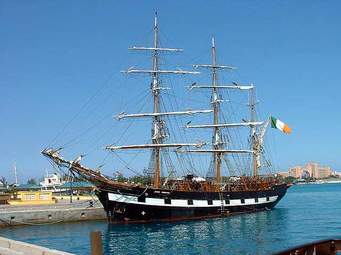 The Jeanie Johnston, a replica of a three-masted barque that was originally built in 1847 in Quebec, Canada, by the Scottish-born shipbuilder John Munn, begins a four-month voyage around Ireland on June 9, 2004.

The original Jeanie Johnston makes her maiden emigrant voyage on April 24, 1848, from Blennerville, County Kerry to Quebec with 193 emigrants on board who are fleeing the effects of the Great Famine that is ravaging Ireland. Between 1848 and 1855, the Jeanie Johnston makes sixteen voyages to North America, sailing to Quebec, Baltimore, and New York. Ships that transport emigrants out of Ireland during this period become known as “famine ships” or “coffin ships.”

The project to build a replica is conceived in the late 1980s, but does not become a reality until November 1993 when a feasibility study is completed. In May 1995, The Jeanie Johnston (Ireland) Company Ltd. is incorporated. The ship is designed by Fred Walker, former Chief Naval Architect with the National Maritime Museum in Greenwich, England.

The original plans are to launch the ship from her shipyard in Blennerville, but a 19th-century shipwreck is discovered by marine archaeologists while a channel is being dredged. To preserve the find, on April 19, 2000 the hull of the Jeanie Johnston is hauled to the shore and loaded onto a shallow-draft barge. There she is fitted with masts and sails, and on May 4 is transported to Fenit, a short distance away. On May 6 the barge is submerged and the Jeanie Johnston takes to the water for the first time. The next day she is officially christened by President Mary McAleese.

In 2003, the replica Jeanie Johnston sails from Tralee to Canada and the United States visiting 32 U.S. and Canadian cities and attracting over 100,000 visitors.

The replica is currently owned by the Dublin Docklands Development Authority who bought it in 2005 for a reported 2.7 million Euro, which were used to clear outstanding loans on the vessel guaranteed by Tralee Town Council and Kerry County Council. It is docked at Custom House Quay in the centre of Dublin.