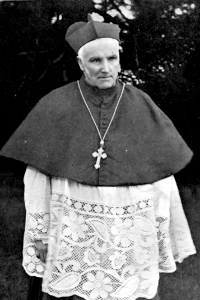 Patrick Joseph O’Donnell, Cardinal of the Roman Catholic Church, is born in Glenties, County Donegal, on November 28, 1856. He serves as Archbishop of Armagh from 1924 until his death, and is elevated to the cardinalate in 1925.

O’Donnell, son of Daniel O’Donnell, a farmer, and his wife, Mary (née Breslin), is one of nine children in a family that claim descent from the O’Donnells of Tyrconnell. He is educated in the High School, Letterkenny, the Catholic University, Dublin, and St. Patrick’s College, Maynooth. He is ordained to the priesthood on June 29, 1880. In that same year he is appointed to the staff of St. Patrick’s College, Maynooth, holding the chairs of Dogmatic and Moral Theology. In 1884 he becomes dean of the revived post-graduate Dunboyne Institute and in 1885 is awarded his STD. From his desk in Maynooth he pours out a continuous stream of articles on moral theology and canon law.

O’Donnell becomes Bishop of Raphoe on February 26, 1888, and is consecrated by Cardinal Michael Logue on April 3 in Letterkenny. With superior qualities of mind and body, he is a benign figure who is yet gifted with sharp political acumen. He has the most distinguished episcopate, locally and nationally. He undertakes and completes prodigious building projects including a superbly-sited neo-gothic cathedral, St. Eunan’s Diocesan College, and the Presentation Monastery and Loreto schools and an extension to Loreto Convent, all in Letterkenny.

O’Donnell takes an active part in the social, political, and economic life of Ireland. A staunch activist for social justice, as Bishop of Raphoe, he is a member of the first Committee of the Irish Agricultural Organization Society, founded by Sir Horace Plunkett. In 1918, when representing the nationalist’s side at the Irish Convention, he opposes John Redmond‘s amendment intended to bring about unanimity on All-Ireland Home Rule.

Cardinal O’Donnell dies on October 22, 1927 in Carlingford, County Louth. The St. Connell’s Museum in his home town of Glenties has a display about his life.