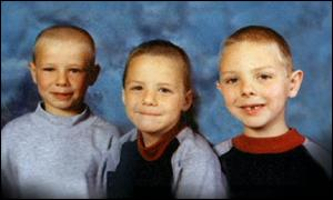 Three brothers, Jason, Richard and Mark Quinn, are killed by the Ulster Volunteer Force (UVF) in a firebomb attack on their home in Ballymoney, County Antrim, Northern Ireland on July 12, 1998. The crime is committed towards the end of the three-decade period known as “The Troubles.”

The Quinn family, consisting of mother Chrissie and sons Richard, Mark and Jason, live in the Carnany estate in the predominantly Protestant town of Ballymoney. The family is of a mixed religious background. Mother Chrissie is Roman Catholic from a mixed background and the boys’ father Jim Dillon is Catholic. After separating from her estranged husband, Chrissie rears the boys as Protestant “to avoid the hassle.” Chrissie lives with her Protestant partner Raymond Craig in Carnany which is predominately Protestant, reflecting the religious make-up of Ballymoney itself. The boys, aged 9, 10 and 11, attend a local state school and on the evening before their deaths had been helping to build the estate’s Eleventh Night loyalist bonfire. A fourth brother, Lee, is staying with his grandmother in Rasharkin at the time of the attack.

The killings take place at the height of the stand-off over the Orange Order march at Drumcree, which creates a tense atmosphere in various towns across Northern Ireland. In the weeks leading up to the fatal attack, the children’s mother expresses fear that she is not welcome in the area and that there is a possibility the family home might be attacked by loyalists. The Ballymoney Times reports a story the week of the deaths, stating that a resident of the Carnany estate had called in and was concerned about tension in the area adding something serious might happen “unless Catholic residents were left alone.”

The attack occurs at approximately 4:30 in the morning as the inhabitants of the house sleep. A car containing members of the Ulster Volunteer Force (UVF), a loyalist paramilitary organisation, arrive at the house and throw a petrol bomb through a window at the rear of the house. The petrol bomb is made from a whiskey bottle. The sounds of the boys’ shouting wakes their mother, who finds her bedroom full of smoke. Chrissie Quinn, Raymond Craig and family friend Christina Archibald escape the resulting fire with minor injuries. Chrissie believes the boys have escaped the fire as she is unable to locate them in the dense smoke before she jumps to safety from a first floor window. Two of the brother’s bodies are found in their mother’s bedroom and the other in another bedroom. Chrissie is taken to the hospital and released the next day after receiving minor injuries and shock in the attack.

One man, Garfield Gilmour, is found guilty of murdering the three brothers fifteen months later and is sentenced to life imprisonment after admitting that he had driven three other men to the house to commit the fatal petrol-bombing. Although Gilmour names the three alleged killers, they are never charged due to a lack of concrete evidence. Gilmour’s conviction for murder is reduced to manslaughter on appeal on June 5, 2000 and he is released six years later. Nine days after his release, his life sentence is replaced by a fixed prison sentence of 14 years.