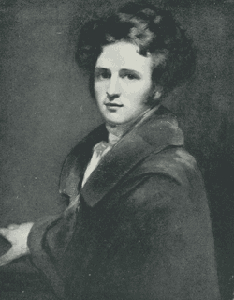 Rothwell is born to James and Elizabeth and is the oldest of their seven children. He trains to become a painter at the Dublin Society‘s school from 1814 until 1820 and wins a silver medal for his work. At the age of 24, he is made a member of the newly established Royal Hibernian Academy and exhibits portraits there from 1826 to 1829. He subsequently moves to London and works as a studio assistant to Thomas Lawrence. When Lawrence dies in 1830, Rothwell completes many of his unfinished works and is poised to become the next foremost portrait painter in Britain and Ireland.

According to Leoneé Ormond’s biographical article in the Grove Dictionary of Art, Rothwell “was at the height of his powers from 1829 to 1831” and he “was much influenced by Lawrence, but he lacked the incisiveness and flair of his master.” According to Fintan Cullen‘s biographical entry in the Oxford Dictionary of National Biography, Rothwell’s “portraits are highly accomplished” and “fine examples” including those of novelist Gerald Griffin and Mary Shelley.

From 1831 to 1834, Rothwell tours Italy to study Italian art so that he can paint history paintings. In the 1830s, he starts painting genre pictures, such as The Poor Mendicants (1837). He usually paints Italian-inspired pieces, such as his semi-nude study Calisto, a work he considers to be his masterpiece. He is furious when the painting is poorly hung at the 1862 International Exhibition in London and publishes a pamphlet on the topic.

When Rothwell returns to London, his popularity has evaporated. He lives and exhibits works in Ireland, the United States, London, and Italy, but he never again achieves the same level of popularity he had reached in the late 1820s.

In 1842 Rothwell marries Rosa Marshall. The couple has several children.  Rothwell contracts a fever while working in Rome and dies on September 13, 1868. Joseph Severn, who painted a portrait of the Romantic poet John Keats, arranges for Rothwell’s funeral and tomb in the Protestant Cemetery, Rome.