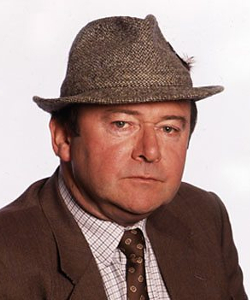 Actors from every genre of stage and screen show come together in the chapel at Terenure College in Dublin on February 4, 2000 for the funeral of Irish television and film actor Tony Doyle.

Doyle is born on January 16, 1942 in Ballyfarnon, County Roscommon. He attends Belcamp College, Dublin as a boarder before going on to University College Dublin, which he does not finish.

Doyle first comes to prominence playing a liberal Catholic priest, Father Sheehy, in RTÉ‘s iconic rural drama The Riordans. He appears in such popular shows as Coronation Street, Between the Lines, 1990, Children of the North and Ballykissangel. He wins an Irish Film and Television Academy award for best leading performance for his role in the 1998 miniseries Amongst Women. He also appears in the first Minder episode, “Gunfight at the OK Laundrette,” playing a drunken Irishman.

Tony Doyle collapses at his home and is taken to St. Thomas’ Hospital in Lambeth, London, England where he dies around 2:00 AM on January 28, 2000.

Brian Quigley, Doyle’s Ballykissangel character, is written out of the show after Doyle’s death in the first episode of the final series where Quigley fakes his own suicide and flees to Brazil.

The Tony Doyle Bursary for New Writing is launched by the BBC following his death. Judges include his friend and Ballykissangel co-star Lorcan Cranitch. Cranitch subsequently stars in the BBC detective series McCready and Daughter, which had been written with Doyle in mind.