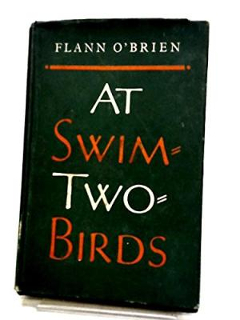 At Swim-Two-Birds, a novel by Irish writer Brian O’Nolan writing under the pseudonym Flann O’Brien, is published on March 13, 1939. It is widely considered to be O’Brien’s masterpiece, and one of the most sophisticated examples of metafiction.

At Swim-Two-Birds is accepted for publication by Longman on the recommendation of Graham Greene, who is a reader for them at the time. It is published under the pseudonym of Flann O’Brien, a name O’Nolan had already used to write hoax letters to The Irish Times. O’Nolan suggests using “Flann O’Brien” as a pen-name during negotiation with Longman. The novel’s title derives from Snámh dá Én, a ford on the River Shannon, between Clonmacnoise and Shannonbridge, reportedly visited by the legendary King Sweeney, a character in the novel.

The book does not sell well after it is published. By the outbreak of World War II it has sold scarcely more than 240 copies. In 1940, Longman’s London premises are destroyed during a bombing raid by the Luftwaffe and almost all the unsold copies are incinerated. The novel is republished by Pantheon Books in New York City in 1950, on the recommendation of James Johnson Sweeney, but sales remain low. In May 1959 Timothy O’Keeffe, while editorial director of the London publishing house MacGibbon & Kee, persuades O’Nolan to allow him to republish At Swim-Two-Birds. More recently, the novel is republished in the United States by Dalkey Archive Press.

The initial reviews for At Swim-Two-Birds are not enthusiastic. The Times Literary Supplement says that the book’s only notable feature is a “schoolboy brand of mild vulgarity.” The New Statesman complains that “long passages in imitation of the Joycean parody of the early Irish epic are devastatingly dull” and the Irish novelist Seán Ó Faoláin comments in John O’London’s Weekly that although the book had its moments, it “had a general odour of spilt Joyce all over it.”

However, most of the support for At Swim-Two-Birds comes not from newspaper reviewers but from writers. Dylan Thomas, in a remark that would be quoted on dust-jackets in later editions of the book, says “This is just the book to give your sister – if she’s a loud, dirty, boozy girl.” Anthony Burgess considers it one of the ninety-nine greatest novels written between 1939 and 1984. Graham Greene’s enthusiastic reader’s report is instrumental in getting the book published in the first place.

Stephen Fry has declared At Swim-Two-Birds one of his favourite books. In 2011, the book is placed on Time‘s top 100 fiction books written in English since 1923.