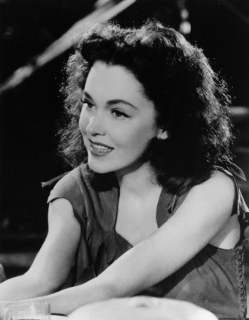 O’Sullivan is born in Boyle, County Roscommon on May 17, 1911, the daughter of Evangeline “Mary Eva” Lovatt and Charles Joseph O’Sullivan, an officer in the Connaught Rangers who serves in World War I. She attends a convent school in Dublin, then the Convent of the Sacred Heart at Roehampton, England. One of her classmates there is Vivian Mary Hartley, future Academy Award-winning actress Vivien Leigh. After attending finishing school in France, O’Sullivan returns to Dublin to work with the poor.

O’Sullivan’s film career begins when she meets motion picture director Frank Borzage, who is doing location filming on Song o’ My Heart for 20th Century Fox. He suggests she take a screen test, which she does, and wins a part in the movie, which stars Irish tenor John McCormack. She travels to the United States to complete the movie in Hollywood. O’Sullivan appears in six movies at Fox, then makes three more at other movie studios.

In 1932, she signs a contract with Metro-Goldwyn-Mayer. After several roles there and at other movie studios, she is chosen by Irving Thalberg to appear as Jane Parker in Tarzan the Ape Man, opposite co-star Johnny Weissmuller. She is one of the more popular ingenues at MGM throughout the 1930s and appears in a number of other productions with various stars. In all, O’Sullivan plays Jane in six features between 1932 and 1942.

She stars with William Powell and Myrna Loy in The Thin Man (1934) and plays Kitty in Anna Karenina (1935) with Greta Garbo and Basil Rathbone. After co-starring with the Marx Bros. in A Day At The Races (1937), she appears as Molly Beaumont in A Yank at Oxford (1938), which is written partly by F. Scott Fitzgerald. At her request, he rewrites her part to give it substance and novelty.

She plays another Jane in Pride and Prejudice (1940) with Laurence Olivier and Greer Garson, and supports Ann Sothern in Maisie Was a Lady (1941). After appearing in Tarzan’s New York Adventure (1942), O’Sullivan asks MGM to release her from her contract so she can care for her husband who has just left the Navy with typhoid. She retreats from show business, devoting her time to her family. In 1948, she re-appears on the screen in The Big Clock, directed by her husband for Paramount Pictures. She continues to appear occasionally in her husband’s movies and on television. However, by 1960 she believes she has permanently retired. In 1958, Farrow’s and O’Sullivan’s eldest son, Michael, dies in a plane crash in California.

Actor Pat O’Brien encourages her to take a part in summer stock, and the play A Roomful of Roses opens in 1961. That leads to another play, Never Too Late, in which she co-stars with Paul Ford in what is her Broadway debut. Shortly after it opens on Broadway, John Farrow dies of a heart attack. O’Sullivan sticks with acting after Farrow’s death. She is also an executive director of a bridal consulting service, Wediquette International. In June and July 1972, O’Sullivan is in Denver, Colorado, to star in the Elitch Theatre production of Butterflies are Free with Karen Grassle and Brandon deWilde. The show ends on July 1, 1972. Five days later, while still in Denver, deWilde is killed in a motor vehicle accident.

When her daughter, actress Mia Farrow, becomes involved with Woody Allen both professionally and romantically, she appears in Hannah and Her Sisters, playing Farrow’s mother. She has roles in Peggy Sue Got Married (1986) and the science fiction oddity Stranded (1987). Mia Farrow names one of her own sons Ronan O’Sullivan Farrow for her mother. In 1994, she appears with Robert Wagner and Stefanie Powers in Hart to Hart: Home Is Where the Hart Is, a feature-length made-for-TV movie with the wealthy husband-and-wife team from the popular weekly detective series Hart to Hart.

Maureen O’Sullivan dies in Scottsdale, Arizona, of complications from heart surgery on June 23, 1998, at the age of 87. O’Sullivan is buried at Most Holy Redeemer Cemetery, Niskayuna, New York. She is survived by six of her children, 32 grandchildren, and 13 great-grandchildren. Michael, her oldest son, is killed at age 19 in a plane crash in 1958.