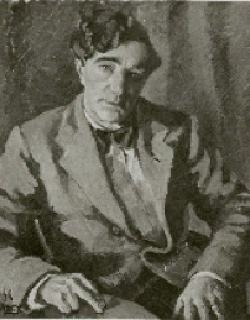 James (Joseph) Hanley, British novelist, short story writer, and playwright of Irish descent, is born in Kirkdale, Liverpool, Lancashire on September 3, 1897. He publishes his first novel, Drift, in 1930. The novels and short stories about seamen and their families that he writes in the 1930s and 1940s include Boy (1931), the subject of an obscenity trial. He comes from a seafaring family and spends two years at sea himself. After World War II there is less emphasis on the sea in his works. While frequently praised by critics, his novels do not sell well. In the late 1950s, 1960s, and early 1970s he writes plays, mainly for the BBC, for radio and then for television, and also for the theatre. He returns to the novel in the 1970s. His last novel, A Kingdom, is published in 1978, when he is 80 years old.

Hanley is born to a working class family. Both his parents are born in Ireland, his father Edward Hanley around 1865, in Dublin, and his mother, Bridget Roache, in Queenstown, County Cork, around 1867. Both are well established in Liverpool by 1891, when they are married. Hanley’s father works most of his life as a stoker, particularly on Cunard Line liners, and other relatives have also gone to sea. He grows up living close to the docks. He leaves school in the summer of 1910 and works for four years in an accountants’ office. Then early in 1915 at the age of 17, he goes to sea for the first time. Thus life at sea is a formative influence and much of his early writing is about seamen.

In April 1917, Hanley jumps ship in Saint John, New Brunswick, Canada, and shortly thereafter joins the Canadian Expeditionary Force in Fredericton, New Brunswick. He fights in France in the summer of 1918, but is invalided out shortly thereafter. After the war he works as a railway porter in Bootle and devotes himself to a prodiguous range of autodidactic, high cultural activities – learning the piano, regularly attending concerts, reading voraciously and, above all, writing. However, it is not until 1930 that his novel Drift is accepted.

Hanley moves from Liverpool to near Corwen, North Wales in 1931, where he meets Dorothy Enid “Timothy” Thomas, neé Heathcote, a descendant of Lincolnshire nobility. They live together and have a child, Liam Powys Hanley, in 1933, but do not marry until 1947. In July 1939, as World War II is approaching, he moves to London to write documentaries and plays for the BBC. He moves back to Wales during the early years of the war, settling in Llanfechain on the other side of the Berwyn range from Corwen. In 1963, the Hanleys move to North London to be close to their son.

In 1937 Hanley publishes an autobiographical work, Broken Water: An Autobiographical Excursion, and while this generally presents a true overall picture of his life, it is seriously flawed, incomplete and inaccurate. Chris Gostick describes it as “a teasing palimpsest of truth and imagination.”

Hanley’s brother is the novelist Gerald Hanley and his nephew is the American novelist and playwright William Hanley. Hanley’s wife also publishes three novels, as Timothy Hanley. She dies in 1980. James Hanley himself dies in London on November 11, 1985 and is buried in Llanfechain, Wales.