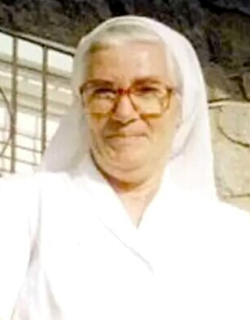 Irish soil is sprinkled over the casket of Sister Theresa Egan as more than 2,000 mourners attend her funeral on the tiny Caribbean island of Saint Lucia on January 7, 2001. The nun is brutally murdered while attending Mass on New Year’s Eve. She is described as a “cheerful and committed” woman by her colleagues.

Sister Egan, originally from Clonaslee, County Laois, trains as a nun at the order’s convent in Ferbane, County Offaly, and leaves Ireland in her early 20s. She spends the first 20 years on the missions, working for long periods in the West Indies, including Grenada.

Sister Egan lives in Saint Lucia for more than four decades, serving as a teacher and administrator at several Catholic schools. She comes from a religious family and seven of the nine children join orders. She is survived by three elderly sisters, all Presentation nuns, and at least one brother.

When the attack takes place Sister Egan, 73, is serving communion at the Basilica of the Immaculate Conception in Castries. According to local police the attack is carried out by a group of men, dressed in traditional rastafarian clothes, who claim to be opposed to the island’s main churches.

Sister Egan is beaten to death after she tries to escape the attackers. One other person reportedly dies at the hospital after the attack. At least 12 are injured including another Irish nun, Sister Mel Kenny from Clonmacnoise, County Offaly.

Two men who identify themselves as Rastafarians are formally charged with murder and attempted murder among other offences.

Her funeral mass takes place in the same Cathedral of the Immaculate Conception where she died. At the front of the basilica, candles are arranged to spell out the words “sister” and “peace.” She is then buried on a hillside overlooking the capital, Castries, where the attack occurred.

The reasons for attack on the Castries cathedral are unknown and lead to much speculation in the Saint Lucian press. Initial reports say the two suspects tell police they are prophets sent by Haile Selassie, the late Ethiopian emperor worshiped as a god by Rastafarians, to combat corruption in the Catholic church. However Rastafarian leader Ras Bongo Isley says the attack is not the work of real rastafarians, since the movement “teaches love and peace.”

There are also reports that the men belong to an anti-Christian organisation, and that “satanic” symbols had been posted on the doors of Cathedral of Immaculate Conception and other churches a week before the attack. The accused, however, are said to deny any knowledge of the symbols.