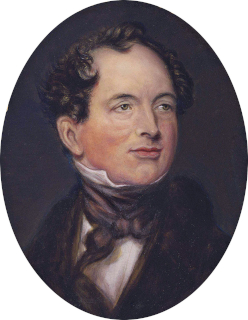 Thomas Moore, Irish poet, singer, songwriter, and entertainer, dies at Sloperton Cottage, Bromham, Wiltshire, England on February 25, 1852. He is best remembered for the lyrics of “The Minstrel Boy” and “The Last Rose of Summer.” He is a close friend of Lord Byron and Percy Bysshe Shelley.

The son of a Roman Catholic wine merchant, Moore is born at 12 Aungier Street in Dublin on May 28, 1779. From a relatively early age he shows an interest in music and other performing arts. He attends several Dublin schools including Samuel Whyte’s English Grammar School in Grafton Street where he learns the English accent with which he speaks for the rest of his life. In 1795 he graduates from Trinity College, Dublin in an effort to fulfill his mother’s dream of his becoming a lawyer.

Upon graduation from Trinity, Moore studies law in London. His major poetic work, Irish Melodies (1807–34), earns him an income of £500 annually for a quarter of a century. It contains such titles as “The Last Rose of Summer” and “Oft in the Stilly Night.” The Melodies, a group of 130 poems set to the music of Moore and Sir John Andrew Stevenson and performed for London’s aristocracy, arouses sympathy and support for the Irish nationalists, among whom Moore is a popular hero.

Lalla-Rookh (1817), a narrative poem set in an atmosphere of Oriental splendour, gives Moore a reputation among his contemporaries rivaling that of Byron and Sir Walter Scott. It is perhaps the most translated poem of its time, and it earns what is up until then the highest price paid by an English publisher for a poem (£3,000). His many satirical works, such as The Fudge Family in Paris (1818), portray the politics and manners of the Regency era.

In 1824 Moore becomes a participant in one of the most celebrated episodes of the Romantic era. He is the recipient of Byron’s memoirs, but he and the publisher John Murray burn them, presumably to protect Byron. He later brings out the Letters and Journals of Lord Byron: With Notices of his Life (1830), in which he includes a life of the poet. His lifelong espousal of the Catholic cause leads him to produce such brilliant works as his parody of agrarian insurgency, The Memoirs of Captain Rock (1824), and his courageous biography of the revolutionary leader of the Irish Rebellion of 1798, The Life and Death of Lord Edward Fitzgerald (1831).

Moore finally settles in Sloperton Cottage at Bromham, Wiltshire, England, and becomes a novelist and biographer as well as a successful poet. Around the time of the Reform Act he is invited to stand for parliament, and considers it, but nothing comes of it. In 1829 he is painted by Thomas Lawrence, one of the last works completed by the artist before his death.

Moore’s personal life is dogged by tragedy including the deaths of all five of his children within his lifetime and a stroke in later life, which disables him from performances – the activity for which he is most renowned. He dies being cared for by his wife at Sloperton on February 25, 1852. His remains are in a vault at St. Nicholas churchyard, Bromham, within view of his cottage-home, beside his daughter Anastasia.