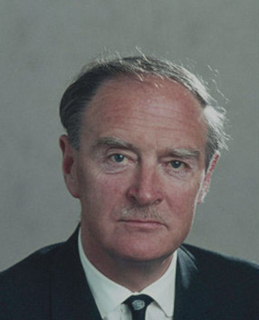 Cosgrave is born on April 13, 1920 in Castleknock, County Dublin. His father, William Thomas Cosgrave, was the first President of the Executive Council and head of the government of the Irish Free State during the first 10 years of its existence (1922–32). The eldest son, he is educated at Synge Street CBS, Castleknock College, Dublin, studies law at King’s Inns, and is called to the Irish bar in 1943. In that same year he enters Dáil Éireann (the lower house of the Oireachtas, the Irish parliament), and he retains his seat until his retirement from politics in 1981.

In 1948, when the first inter-party government replaces Éamon de Valera’s Fianna Fáil regime, which had been in power for the previous 16 years, Cosgrave becomes parliamentary secretary to the Taoiseach and to the Minister for Industry and Commerce. It is a short-lived administration, going out of power in 1951 after three years of rule. But in a second inter-party government (1954–57), he becomes Minister for External Affairs and leads the first Irish delegation to the United Nations General Assembly in 1956.

Cosgrave succeeds James Dillon as leader of the Fine Gael party in 1965. Eight years later, as leader of a coalition government in which Fine Gael combines forces with the Labour Party, he becomes Taoiseach. He and British Prime Minister Edward Heath are the main participants in the intergovernmental conference at Sunningdale in December 1973 that gives birth to Northern Ireland’s first, though short-lived, power-sharing executive (1973–74).

A devout Roman Catholic, Cosgrave is intensely conservative on social issues and shocks his cabinet colleagues by voting against his own government’s bill on liberalizing the sale of contraceptives in 1974. The National Coalition is defeated in the general election of June 1977, largely on the economic issues of inflation and unemployment.

In 1981, Cosgrave retires as Dáil Deputy for Dún Laoghaire to be replaced by his son, Liam T. Cosgrave. He reduces his involvement in public life but he makes occasional appearances and speeches. In October 2010 he attends the launch of The Reluctant Taoiseach, a book about former Taoiseach John A. Costello written by David McCullagh. He also appears in public for the Centenary of the Easter Rising in 2016, watching from a car as the military parade marches through Dublin. On May 8, 2016, in a joint appearance with the grandsons of Éamonn Ceannt and Cathal Brugha, he unveils a plaque commemorating the 1916 Rising at St. James’s Hospital, the former site of the South Dublin Union.

Liam Cosgrave dies on October 4, 2017 at the age of 97 of natural causes. He had been at Tallaght Hospital for several months prior to his death there. His funeral is held on October 7, 2017, after which he is interred alongside his father at Inchicore‘s Goldenbridge Cemetery.

Taoiseach Leo Varadkar says “Liam Cosgrave was someone who devoted his life to public service; a grateful country thanks and honours him for that and for always putting the nation first. Throughout his life he worked to protect and defend the democratic institutions of our State, and showed great courage and determination in doing so. He always believed in peaceful co-operation as the only way of achieving a genuine union between the people on this island, and in the 1970s he celebrated that this country had embarked, in his own words, ‘on a new career of progress and development in the context of Europe’. I had the honour on a few occasions to meet and be in the presence of Liam Cosgrave, and I was always struck by his commanding presence and great humility, which in him were complementary characteristics.”