Leo Eric Varadkar, Irish Fine Gael politician who is serving since June 2020 as Tánaiste and Minister for Enterprise, Trade and Employment, is born on January 18, 1979, in the Rotunda Hospital, Dublin.

Varadkar is the third child and only son of Ashok and Miriam (née Howell) Varadkar. His father was born in Bombay (now Mumbai), India, and moved to the United Kingdom in the 1960s to work as a doctor. His mother, born in Dungarvan, County Waterford, meets her future husband while working as a nurse in Slough, Berkshire, England. He is educated at the St. Francis Xavier national school in Blanchardstown, Dublin, and then The King’s Hospital, a Church of Ireland secondary school in Palmerstown. During his secondary schooling, he joins Young Fine Gael. He is admitted to Trinity College Dublin (TCD), where he briefly reads law before switching to its School of Medicine. At TCD, he is active in the university’s Young Fine Gael branch and serves as Vice-President of the Youth of the European People’s Party, the youth wing of the European People’s Party, of which Fine Gael is a member. He is selected for the Washington Ireland Program for Service and Leadership (WIP), a half-year personal and professional development program in Washington, D.C., for students from Ireland.

Varadkar graduates in 2003, after completing his internship at King Edward Memorial Hospital in Mumbai. He then spends several years working as a non-consultant hospital doctor in St. James’s Hospital, Dublin, and Connolly Hospital, Blanchardstown, before specialising as a general practitioner in 2010.

In 2004, Varadkar joins Fine Gael and becomes a member of Fingal County Council and later serves as Deputy Mayor of Fingal. He is elected to Dáil Éireann for the first time in 2007. During the campaign for the 2015 same-sex marriage referendum, he comes out as gay, becoming the first serving Irish minister to do so.

Varadkar is elected a Teachta Dála (TD) for the Dublin West constituency in 2007. He serves under Taoiseach Enda Kenny as Minister for Transport, Tourism and Sport from 2011 to 2014, Minister for Health from 2014 to 2016, and Minister for Social Protection from 2016 to 2017.

In May 2017, Kenny announces that he is planning to resign as Taoiseach and Fine Gael leader. Varadkar stands in the leadership election to replace him. Although more party members vote for his opponent, Simon Coveney, he wins by a significant margin among Fine Gael members of the Oireachtas, and is elected leader on June 2. Twelve days later, he is appointed Taoiseach, and at 38 years of age becomes the youngest person to hold the office. He is Ireland’s first, and the world’s fourth, openly gay head of government and the first Taoiseach of Indian heritage.

In 2020, Varadkar calls a general election to be held in February. While polls in 2019 have suggested a favourable result for Fine Gael, they ultimately come in third in terms of seats and votes, behind Fianna Fáil and Sinn Féin, with 35 seats, a loss of 15 seats for the party from the previous general election, when it had finished in first position. He resigns and is succeeded by Micheál Martin as Taoiseach. He is subsequently appointed Tánaiste and Minister for Enterprise, Trade and Employment as part of a three-party coalition composed of Fianna Fáil, Fine Gael and the Green Party. 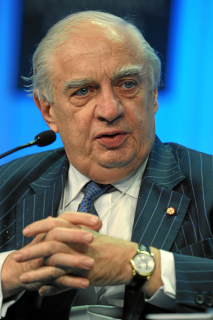 Peter Denis Sutherland, businessman, barrister and politician, is born in Foxrock, Dublin on April 25, 1946. He is a barrister by profession and a Senior Counsel of the Bar Council of Ireland. He is known for serving in a variety of international organisations, political and business roles.

Sutherland is educated at Gonzaga College, Ranelagh, Dublin. He is of partial Scottish ancestry. He graduates in Civil Law at University College Dublin and practices at the Irish Bar between 1969 and 1980. He marries Maruja Sutherland, a Spaniard, in 1974.

Sutherland makes his entry into politics when he is appointed Attorney General of Ireland in June 1981. He resigns in March 1982 only to take the post again between December 1982 and December 1984.

In 1993, Sutherland becomes Director-General of the General Agreement on Tariffs and Trade, now the World Trade Organization. He serves as Chairman of Allied Irish Banks (AIB) from 1989 to 1993 and as Chairman of Goldman Sachs from 1995 to 2015.

In September 2016, Sutherland suffers a heart attack while on his way to Mass at a Catholic Church in London. Six months later, he resigns from his post as United Nations Special Representative of the Secretary-General for International Migration because of poor health. After a long illness, he dies at St. James’s Hospital in Dublin on January 7, 2018, of complications from an infection, at the age of 71. He is buried in Kilternan Cemetery Park in Dublin.

Cosgrave is born on April 13, 1920 in Castleknock, County Dublin. His father, William Thomas Cosgrave, was the first President of the Executive Council and head of the government of the Irish Free State during the first 10 years of its existence (1922–32). The eldest son, he is educated at Synge Street CBS, Castleknock College, Dublin, studies law at King’s Inns, and is called to the Irish bar in 1943. In that same year he enters Dáil Éireann (the lower house of the Oireachtas, the Irish parliament), and he retains his seat until his retirement from politics in 1981.

In 1948, when the first inter-party government replaces Éamon de Valera’s Fianna Fáil regime, which had been in power for the previous 16 years, Cosgrave becomes parliamentary secretary to the Taoiseach and to the Minister for Industry and Commerce. It is a short-lived administration, going out of power in 1951 after three years of rule. But in a second inter-party government (1954–57), he becomes Minister for External Affairs and leads the first Irish delegation to the United Nations General Assembly in 1956.

Cosgrave succeeds James Dillon as leader of the Fine Gael party in 1965. Eight years later, as leader of a coalition government in which Fine Gael combines forces with the Labour Party, he becomes Taoiseach. He and British Prime Minister Edward Heath are the main participants in the intergovernmental conference at Sunningdale in December 1973 that gives birth to Northern Ireland’s first, though short-lived, power-sharing executive (1973–74).

A devout Roman Catholic, Cosgrave is intensely conservative on social issues and shocks his cabinet colleagues by voting against his own government’s bill on liberalizing the sale of contraceptives in 1974. The National Coalition is defeated in the general election of June 1977, largely on the economic issues of inflation and unemployment.

In 1981, Cosgrave retires as Dáil Deputy for Dún Laoghaire to be replaced by his son, Liam T. Cosgrave. He reduces his involvement in public life but he makes occasional appearances and speeches. In October 2010 he attends the launch of The Reluctant Taoiseach, a book about former Taoiseach John A. Costello written by David McCullagh. He also appears in public for the Centenary of the Easter Rising in 2016, watching from a car as the military parade marches through Dublin. On May 8, 2016, in a joint appearance with the grandsons of Éamonn Ceannt and Cathal Brugha, he unveils a plaque commemorating the 1916 Rising at St. James’s Hospital, the former site of the South Dublin Union.

Liam Cosgrave dies on October 4, 2017 at the age of 97 of natural causes. He had been at Tallaght Hospital for several months prior to his death there. His funeral is held on October 7, 2017, after which he is interred alongside his father at Inchicore‘s Goldenbridge Cemetery.

Taoiseach Leo Varadkar says “Liam Cosgrave was someone who devoted his life to public service; a grateful country thanks and honours him for that and for always putting the nation first. Throughout his life he worked to protect and defend the democratic institutions of our State, and showed great courage and determination in doing so. He always believed in peaceful co-operation as the only way of achieving a genuine union between the people on this island, and in the 1970s he celebrated that this country had embarked, in his own words, ‘on a new career of progress and development in the context of Europe’. I had the honour on a few occasions to meet and be in the presence of Liam Cosgrave, and I was always struck by his commanding presence and great humility, which in him were complementary characteristics.”

Con Houlihan, Irish sportswriter, dies in Dublin on August 4, 2012. Despite only progressing to national journalism at the age of 46, he becomes “the greatest and the best-loved Irish sports journalist of all.”

Houlihan is born on December 6, 1925, in Castleisland, County Kerry. Over a lengthy career, Houlihan covers many Irish and international sporting events, from Gaelic football and hurling finals, to soccer and rugby World Cups, the Olympic Games and numberless race meetings inside and outside Ireland.

Houlihan is a journalist with the Irish Press group writing for The Irish Press, Evening Press and sometimes The Sunday Press, until the group’s demise in 1995. He writes the “Tributaries” column and Evening Press back sports page “Con Houlihan” column.

Houlihan dies on the morning of August 4, 2012 in St. James’s Hospital in Dublin. Often considered one of Ireland’s finest writers, he leaves behind a legacy of immense sports journalism that spans over 60 years. A minute’s silence is observed in his memory ahead of Kerry GAA‘s All-Ireland Senior Football Championship quarter-final defeat to Donegal GAA at Croke Park the following day. His last column, in which he wishes Irish Olympic boxer Katie Taylor well, is published the day after his death. His funeral takes place on August 8, 2012.

Ireland’s president, Michael D. Higgins, leads the tributes to Houlihan, describing him as a “most original writer, with a unique style based on his extensive knowledge of literature, politics, life and sport.” He adds, “He had that special quality and ability to identify with the passion, pain and celebration of Irish community life.”

A bronze bust of Houlihan is unveiled in his hometown of Castleisland in 2004. In 2011, another sculpture is erected outside The Palace bar in Dublin.