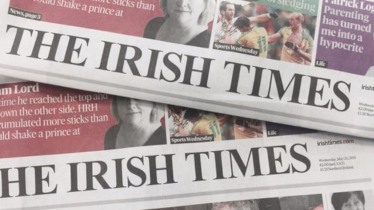 The Irish Times, an Irish daily broadsheet newspaper, is launched at 4 Lower Abbey Street in Dublin on March 29, 1859. The first appearance of a newspaper using the name The Irish Times occurs in 1823 but it closes in 1825. The title is revived as a thrice weekly publication by Major Lawrence E. Knox. It is originally founded as a moderate Protestant Irish nationalist newspaper, reflecting the politics of Knox, who stands unsuccessfully as a parliamentary candidate for Isaac Butt’s Home Rule League. In its early days, its main competitor is the Dublin Daily Express.

Though formed as a Protestant nationalist paper, within two decades and under new owners it becomes the voice of British unionism in Ireland. It is no longer marketed as a unionist paper, but rather presents itself politically as “liberal and progressive,” as well as promoting neoliberalism on economic issues. The editorship of the newspaper from 1859 until 1986 is controlled by the Anglo-Irish Protestant minority, only gaining its first nominal Irish Catholic editor 127 years into its existence.

The paper’s most prominent columnists include writer and arts commentator Fintan O’Toole and satirist Miriam Lord. The late Taoiseach Garret FitzGerald is once a columnist. Senior international figures, including Tony Blair and Bill Clinton, have written for its op-ed page. Its most prominent columns have included the political column Backbencher, by John Healy, Drapier, an anonymous piece produced weekly by a politician giving the ‘insider’ view of politics, Rite and Reason, a weekly religious column edited by ‘religious affairs’ editor Patsy McGarry, and the long-running An Irishman’s Diary. An Irishman’s Diary is written by Patrick Campbell in the forties (under the pseudonym ‘Quidnunc’), by Seamus Kelly from 1949 to 1979 (also writing as ‘Quidnunc’) and more recently by Kevin Myers. After Myers’ move to the rival Irish Independent, An Irishman’s Diary has usually been the work of Frank McNally. On the sports pages, Philip Reid is the paper’s golf correspondent.

One of its most popular columns is the biting and humorous Cruiskeen Lawn satire column written, originally in Irish, later in English, by Myles na gCopaleen, the pen name of Brian O’Nolan who also writes books using the name Flann O’Brien. Cruiskeen Lawn is an anglicised spelling of the Irish words crúiscín lán, meaning “full little jug.” Cruiskeen Lawn makes its debut in October 1940, and appears with varying regularity until O’Nolan’s death in 1966.

The editor is Paul O’Neill who succeeds Kevin O’Sullivan on April 5, 2017. The deputy editor is Deirdre Veldon. The Irish Times is published every day except Sundays and employs 420 people.