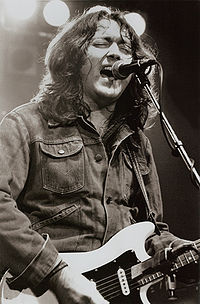 William Rory Gallagher, Irish blues and rock multi-instrumentalist, songwriter, and bandleader, dies at the age of 47, in London on June 14, 1995 of complications following a liver transplant.

Gallagher is born in Ballyshannon, County Donegal, on March 2, 1948. Both he and his brother Dónal are musically inclined and encouraged by their parents. At age nine, Gallagher receives his first guitar from them. After winning a talent contest when he is twelve, he begins performing with both his acoustic guitar and an electric guitar that he purchases with his prize money. It is, however, his purchase three years later of a 1961 Fender Stratocaster for £100 that becomes his primary instrument and most associated with him for the span of his lifetime.

Gallagher is initially attracted to skiffle after hearing Lonnie Donegan on the radio. While still in school, playing songs by Buddy Holly and Eddie Cochran, he discovers his greatest influence in Muddy Waters. He begins experimenting with folk, blues, and rock music.

While still a young teenager, Gallagher begins playing after school with Irish showbands. In 1963, he joins one named Fontana, a sextet playing the popular hit songs of the day. The band tours Ireland and the United Kingdom, earning enough money for Gallagher to make the payments on his Stratocaster guitar. Gallagher begins to influence the band’s repertoire and successfully moulds Fontana into The Impact, changing the line-up into a rhythm and blues group. The band plays gigs in Ireland and Spain until it disbands in London, with Gallagher and the bassist and drummer continuing to perform as a trio in Hamburg, Germany.

In 1966, Gallagher returns to Ireland and forms Taste, a blues rock and R&B power trio. Initially, the band is composed of Gallagher and Cork musicians Norman Damery and Eric Kitteringham. However, by 1968, Damery and Kitteringham are replaced by Belfast musicians John Wilson on drums and Richard McCracken on bass. Performing extensively in the UK, the group supports both Cream at their Royal Albert Hall farewell concert and the blues supergroup Blind Faith on a tour of North America.

After the break-up of Taste in 1970, Gallagher tours under his own name. He hires former Deep Joy bass player Gerry McAvoy to play on his self-titled debut album, Rory Gallagher. This is the beginning of a twenty-year musical relationship between Gallagher and McAvoy. The 1970s are Gallagher’s most prolific period, producing ten albums in the decade. In 1971 he is voted Melody Maker‘s International Top Guitarist of the Year, ahead of Eric Clapton. However, despite a number of his albums reaching the UK Albums Chart, Gallagher does not attain major star status. Though he sells over thirty million albums worldwide, it is his marathon live performances that win him the greatest acclaim.

In the 1980s Gallagher continues recording and embarks on a tour of the United States. In addition, he plays with Box of Frogs, a band formed in 1983 by former members of The Yardbirds.

In the later years of his life, Gallagher develops a phobia of flying. To overcome this he receives a prescription for a powerful sedative. This medication, combined with his alcohol use, results in severe liver damage. Despite his condition he continues touring. By his final performance on January 10, 1995 in the Netherlands, he is visibly ill and the remainder of the tour is cancelled. He is admitted to King’s College Hospital in London in March 1995. His liver is failing and the doctors determine that a liver transplant is the only possible course of action. After 13 weeks in intensive care, his health suddenly worsens when he contracts a Staphylococcal infection. Gallagher dies on June 14, 1995, and is buried in St. Oliver’s Cemetery just outside Ballincollig near Cork.