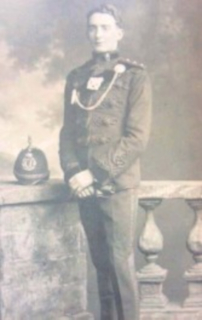 Percival Lea-Wilson, a District Inspector in the Royal Irish Constabulary (RIC) who is stationed at Gorey, County Wexford, is shot dead on June 15, 1920 by the Irish Republican Army (IRA) outside his Gorey home on the orders of Michael Collins.

Lea-Wilson is born in Kensington, London and is educated at the University of Oxford but his route into the British Army begins with a stint as a RIC constable in Charleville, County Cork in the early 20th century.

When World War I breaks out in 1914 Lea-Wilson joins the British army where he reaches the rank of captain in the 18th Royal Irish Regiment. An injury during the war forces him back to Ireland where he is stationed in Dublin, just in time for the Easter Rising in 1916.

When the week long rising ends, the rebels who had fought in the Four Courts and the GPO are marched to the Rotunda Hospital where they are kept overnight under the glare of British troops. Among those detained are leaders of the rebellion such as Sean Mac Diarmada and Tom Clarke. Clarke is singled out and subjected to public humiliation by 28-year-old British army Captain Percival Lea-Wilson.

Lea-Wilson and his soldiers walk among the captured rebels and he picks the 58-year-old Clarke out of the group. He marches Clarke to the steps of the hospital where he orders soldiers to strip him bare as nurses look on in horror from the windows above. Clarke is beaten and left there overnight in his tattered clothes. One of the prisoners, Michael Collins, who witnesses Clarke’s mistreatment at the hands of the British captain vows vengeance.

In the years following the Easter Rising, Lea-Wilson settles in Wexford where he attains the role of RIC district inspector.

On the morning of June 15, 1920, Lea-Wilson is walking back home after paying a visit to the RIC barracks in Gorey. Dressed in his civilian clothes, he stops at the local railway station where he purchases a newspaper and meets Constable Alexander O’Donnell, who accompanies him on part of his walk home.

O’Donnell and Lea-Wilson part company at the railway bridge on Ballycanew Road while further up that very same stretch of road there is a number of men standing around a parked car with its hood raised. Michael Collins had sent Liam Tobin and Frank Thornton from Dublin to meet with Joe McMahon, Michael McGrath and Michael Sinnott in Enniscorthy. They were then driven by Jack Whelan to Ballycanew Road to carry out the assassination of Lea-Wilson.

Unaware of his assassins lying in wait , Lea-Wilson is reading his paper while strolling along the road. The men by the parked car pull out revolvers when their target comes into range and two bullets strike him down. He manages to quickly get back on his feet and attempts to make an escape but his six assassins run after him and finally bring him down in a hail of bullets. A coroner’s report later states that Lea-Wilson had been shot seven times.

When the shooting ends, one of Lea-Wilson’s executioners calmly walks up to the body to make sure he is dead. He then picks up the newspaper from the ground and takes it with him. Later that evening Michael Collins is in the Wicklow Hotel in Dublin when word reaches him from Wexford of the shooting death of Lea-Wilson. Collins greets the news with glee and mentions to one of his comrades, “Well we finally got him!”

Percival Lea-Wilson is buried in Putney Vale Cemetery in southwest London. His grave is marked by a plaque which mentions his assassination in Gorey in 1920, a death which has its roots in the Easter Rising four years previously.

One thought on “Assassination of RIC Inspector Percival Lea-Wilson”