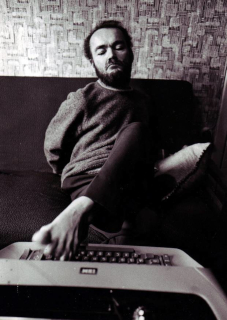 Christy Brown, Irish writer and painter who has cerebral palsy and is able to write or type only with the toes of one foot, dies on September 7, 1981 in Parbrook, Somerset, England. His most recognized work is his autobiography, My Left Foot (1954).

Brown is born into a working-class Irish family at the Rotunda Hospital in Dublin on June 5, 1932. He is one of 22 siblings of parents Bridget Fagan and Patrick Brown. After his birth, doctors discover that he has severe cerebral palsy, a neurological disorder which leaves him almost entirely spastic in his limbs. Though urged to commit him to a hospital, his parents are unswayed and subsequently determined to raise him at home with their other children. During his adolescence, social worker Katriona Delahunt becomes aware of his story and begins to visit the Brown family regularly. She brings him books and painting materials as, over the years, he has shown a keen interest in the arts and literature. He has also demonstrated extremely impressive physical dexterity since, soon after discovering several household books, he had learned to both write and draw himself with his left leg, the only limb over which he has unequivocal control.

Brown quickly matures into a serious artist. Although he famously receives almost no formal schooling during his youth, he does attend St. Brendan’s School-Clinic in Sandymount intermittently. At St. Brendan’s he comes in contact with Dr. Robert Collis, a noted author. Collis discovers that Brown is also a natural novelist and, later, helps use his own connections to publish My Left Foot, by then a long-gestating autobiographical account of Brown’s struggle with everyday life amidst the vibrant culture of Dublin.

When My Left Foot becomes a literary sensation, one of the many people who write letters to Brown is married American woman Beth Moore. Brown and Moore become regular correspondents and, in 1960, he holidays in North America and stays with Moore at her home in Connecticut. When they meet again in 1965 they began an affair. Brown journeys to Connecticut once more to finish his magnum opus, which he had been developing for years. He finally does so in 1967 with help from Moore, who introduces and administers a strict working regimen, mostly by denying him alcohol until a day’s work is completed. The book, Down All the Days, is published in 1970. It is an ambitious project drawn largely from a playful expansion of My Left Foot. It becomes an international best-seller, translated into fourteen languages. The Irish Times reviewer Bernard Share claims the work is “the most important Irish novel since Ulysses.”

Down All the Days is followed by a series of other novels, including A Shadow on Summer (1972), Wild Grow the Lilies (1976) and A Promising Career (published posthumously in 1982). He also publishes three poetry collections: Come Softly to My Wake, Background Music and Of Snails and Skylarks. All the poems are included in The Collected Poems of Christy Brown.

Brown’s fame continues to spread internationally and he becomes a prominent celebrity. Upon his return to Ireland, he is able to use proceeds from the sales of his books to design and move into a specially constructed home outside Dublin with his sister’s family. Though he and Beth had planned to marry and live together at the new home, and though Moore had informed her husband of these plans, it is around this time that he begins an affair with Englishwoman Mary Carr, whom he meets at a party in London. He then terminates his affair with Moore and marries Carr at the Registry Office, Dublin, in 1972. They move to Stoney Lane, Rathcoole, County Dublin, to Ballyheigue, County Kerry and then to Somerset. He continues to paint, write novels, poetry and plays. His 1974 novel, A Shadow on Summer, is based on his relationship with Moore, whom he still considers a friend.

Brown’s health deteriorates after marrying Carr. He becomes mainly a recluse in his last years, which is thought to be a direct result of Carr’s influence and perhaps abusive nature. He dies at the age of 49 on September 7, 1981 after choking during a lamb chop dinner. His body is found to have significant bruising, which leads many to believe that Carr had physically abused him. Further suspicions arise after Georgina Hambleton’s biography, The Life That Inspired My Left Foot, reveals a supposedly more accurate and unhealthy version of their relationship. The book portrays Carr as an abusive alcoholic and habitually unfaithful. He is buried in the Glasnevin Cemetery in Dublin.

A film adaptation of My Left Foot directed by Jim Sheridan is produced in 1989 from a screenplay by Shane Connaughton. Daniel Day-Lewis stars as Brown and Brenda Fricker as his mother. Both win Academy Awards for their performances. The film also receives Academy Award nominations for Best Picture, Best Director, and Best Adapted Screenplay.