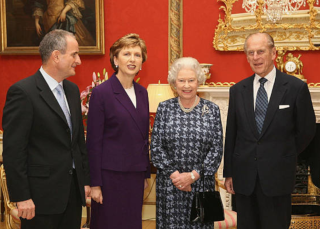 President of Ireland Mary McAleese and Queen Elizabeth II shake hands on Northern Ireland soil for the first time on December 9, 2005 — a symbolic milestone following years of peacemaking in this long-disputed British territory.

The British monarch and the Republic of Ireland‘s head of state chat and pose together at Hillsborough Castle, outside Belfast, for an occasion that would have provoked hostility within Northern Ireland’s Protestant majority just a few years earlier. But their trouble-free meeting becomes inevitable once Ireland dropped its territorial claim to Northern Ireland as part of the landmark Good Friday Agreement peace accord of 1998. The visit also fuels speculation the queen could soon make her first official visit to the neighboring Republic of Ireland, where the Irish Republican Army assassinated Lord Louis Mountbatten, the uncle of her husband, Prince Philip, Duke of Edinburgh.

No British monarch has visited the territory of the modern-day Republic of Ireland since George V visited Dublin in 1911, a decade before the island’s partition into a mostly Protestant north that remains within the United Kingdom, and a predominantly Catholic rest of Ireland that gradually gains full independence from Britain.

Camera crews are allowed to film the moment, but not record the sound, when McAleese shakes the queen’s hand at the start of a 20-minute meeting, their fourth since 1998. Previous meetings occurred at Buckingham Palace and on a World War I battlefield site. McAleese later calls it “a very special day for Anglo-Irish relationships” that brings forward the day when the queen will visit the Irish Republic.

McAleese, a Belfast-born Catholic, had made scores of visits to Northern Ireland since being elected to the Irish Republic’s largely symbolic presidency in 1997. As part of her presidential theme of “building bridges,” she regularly invites Protestant groups to her official Dublin mansion and has built impressive diplomatic contacts with northern Protestants.

Before McAleese’s arrival, visits north by an Irish president were rare events that drew public protests from Protestants, who demanded that Ireland remove its territorial claim from its 1937 constitution. The republic’s voters overwhelmingly supported this in a May 1998 referendum, an action completed in December 1999.

The queen has avoided traveling to the Irish Republic, in part, because of security fears following the IRA assassination of Mountbatten in August 1979. He, his daughter-in-law and two teenage boys are killed when the IRA blows up his private boat near his castle in County Sligo. However, Prince Philip and their son, Prince Charles, make several visits to the Irish Republic in the decade following the IRA’s 1994 cease-fire.