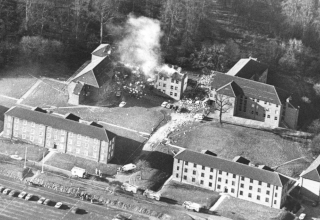 The Clive Barracks bombing, a bomb attack carried out by the Provisional Irish Republican Army on a British Army barracks at Ternhill, Shropshire, takes place on February 20, 1989. The attack injures two soldiers from the Parachute Regiment and destroys a large part of the barracks.

The IRA intensifies their campaign outside of Northern Ireland in 1988. In May 1988 the IRA enjoys one of their most successful ambushes on British Military figures in mainland Europe with attacks in the Netherlands where they kill three and injured three Royal Air Force soldiers. Four months later in August 1988, the Provisional IRA carries out the Inglis Barracks bombing, which kills one British soldier and injures ten others. It is the first IRA attack in England since the infamous Brighton hotel bombing in October 1984.

On Monday, February 20, 1989, the Provisional IRA explodes two bombs at Clive Barracks at Ternhill. Only two of the planned three bombs are primed and ready to explode when the two IRA members, both of whom are wearing combat jackets, are spotted and approached by a sentry, Lance-Corporal Alan Norris, who raises the alarm. They throw the third bomb, which was inside a backpack, at him and run to a car they had stolen earlier and drive away. Soldiers fire three rounds at the IRA members as they are fleeing but no shots hit their target.

The bombs explode about ten minutes after the IRA men escape. Even though nobody is killed in the attack, the explosions causes large damage to the barracks. The alarm sounded by Norris gives about fifty British soldiers a chance to escape almost certain death. Only two soldiers are injured, one being hit by flying glass the other with only minor injuries.

The IRA claims responsibility for the bombings and British police believe IRA fugitive Patrick Sheehy is the main operator in the attack. The IRA issues a statement saying, “While Britain maintains its colonial grip on the north of Ireland, the IRA will continue to strike at those who oversee and implement British Government policy in our country.”

Five months later, in July 1989, the IRA kills a British soldier in Hanover, West Germany when they place a booby trap IED under his car. On September 7 the IRA mistakenly shoots dead Heidi Hazell, the German wife of a British soldier, in a hail of bullets in Dortmund. In the climax of the England and European campaign by the IRA is the Deal barracks bombing in which the IRA kills eleven Royal Marines and seriously injures 22 others. It is the highest death toll from an operation in England in seven years since the Hyde Park and Regent’s Park bombings on September 22, 1982, which kill 11 soldiers and injured more than fifty.