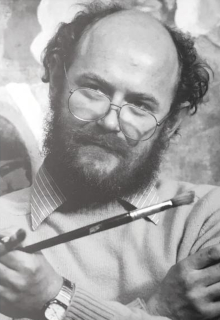 Paul Funge, internationally respected painter and arts enthusiast, dies at Loughlinstown Hospital in the south Dublin suburb of Loughlinstown on February 21, 2011 after a short illness.

A painter of portraits and landscapes, Funge teaches art in many schools including Clongowes Wood College and Newbridge College. He also lectures at the National College of Art and Design (NCAD), the University of California, and Kunsthistorisch Instituut in Amsterdam. He is also an inspector for art in the Department of Education for a number of years.

As a portrait artist Funge’s sitters included U2’s Adam Clayton, Frank McGuinness and Colm Tóibín as well as many ministers and academics.

Funge suffers a fall before Christmas 2010, badly fracturing his leg and he is admitted to St. Vincent’s Hospital. On January 6, he transfers from Vincent’s to recuperate at a nursing home in Bray. In early February he takes a turn and develops chest problems. His condition deteriorates and he is admitted to the ICU in Loughlinstown Hospital. Initially he appears to be making a reasonable recovery, but his condition deteriorates again in the days prior to his death.

Following Funge’s death, Eamon Carter, director of Gorey School of Art, pays tribute to him as a visionary who felt passionate about decentralising the arts to areas outside of Dublin.

Carter adds that it had just been announced that the Gorey School of Art is linking up with NCAD to provide a masters in fine arts and it is sad that in the week it receives such good news it also receives the sad news of Funge’s death. “I’m saddened that he wasn’t here to see that because he would have been chuffed obviously,” he said.