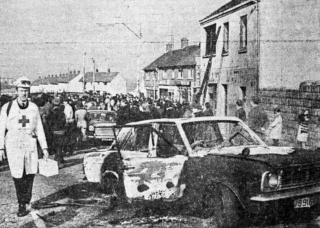 The Battle at Springmartin, a series of gun battles in Belfast, Northern Ireland, begins on May 13, 1972 and continues into the following day. It involves the British Army, the Provisional Irish Republican Army (IRA), and the Ulster Volunteer Force (UVF).

The night before the bombing, snipers from the UVF West Belfast Brigade take up position along the second floor of an abandoned row of flats at the edge of the Ulster Protestant Springmartin estate. The flats overlooked the Catholic Ballymurphy estate. Rifles, mostly World War II stock, are ferried to the area from dumps in the Shankill Road.

The violence begins shortly after 5:00 PM on Saturday, May 13, 1972, when a car bomb, planted by Ulster loyalists, explodes without warning outside the crowded Kelly’s Bar, at the junction of the Springfield Road and Whiterock Road. The pub is in a mainly Irish Catholic and nationalist area of Ballymurphy and most of its customers are from the area. At the time of the blast, the pub is crowded with men watching an association football match between England and West Germany on colour television. Following the blast the UVF snipers open fire on the survivors. This begins the worst fighting in Northern Ireland since the suspension of the Parliament of Northern Ireland and the imposition of direct rule from London.

Sixty-three people are injured, eight of them seriously. John Moran, age 19, who had been working at Kelly’s as a part-time barman, dies of his injuries on May 23.

For the rest of the night and throughout the next day, local IRA units fight gun battles with both the UVF and British Army. Most of the fighting takes place along the interface between the Catholic Ballymurphy and Ulster Protestant Springmartin housing estates, and the British Army base that sits between them. Five civilians (four Catholics, one Protestant), a British soldier and a member of the IRA Youth Section are killed in the violence. Four of the dead are teenagers.

At first, the British Army claims that the blast had been an “accident” caused by a Provisional IRA bomb. The Secretary of State for Northern Ireland, William Whitelaw, tells the House of Commons on May 18 that the blast is caused by a Provisional IRA bomb that exploded prematurely. However, locals suspect that the loyalist Ulster Defence Association (UDA) had planted the bomb. Republican sources say that IRA volunteers would not risk storing such a large amount of explosives in such a crowded pub. It later emerges that the bomb had indeed been planted by loyalists.

A memorial plaque on the site of the former pub names three members of staff who lost their lives as a result of the bomb and the gun battles that followed. It reads:

This plaque marks the spot
where Kelly’s Bar once stood
and here on 13th May 1972
a no warning Loyalist car bomb exploded.
As a result, 66 people were injured
and three innocent members of staff
of Kelly’s Bar lost their lives.
They were:
Tommy McIlroy (died 13th May 1972)
John Moran (died from his injuries 23rd May 1972)
Gerard Clarke (died from his injuries 6th September 1989)
Ar dheis Dé go raibh a namacha”