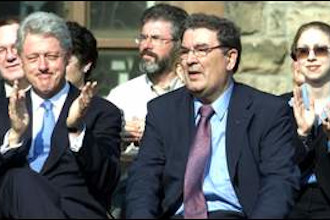 Former U.S. president Bill Clinton begins a four-day visit to the Republic of Ireland and Northern Ireland on May 20, 2001 to try to advance the peace process. He spends time both north and south of the border, fulfilling engagements in Belfast, Derry, Enniskillen and Dublin.

Clinton’s goal is to use his influence to try to enhance the electoral fortunes of the parties that support the Good Friday Agreement, particularly David Trimble‘s Ulster Unionist Party, who are under pressure from Ian Paisley‘s anti-agreement Democratic Unionist Party (DUP).

Clinton arrives at Farranfore Airport, County Kerry, before heading to a round of golf at Ballybunion Golf Club with the former Irish deputy prime minister and Labour Party leader Dick Spring. He spends the night at Dromoland Castle, County Clare, before two days of public engagements in Dublin.

Trimble has vowed to quit as head of the Stormont Executive, where his party shares power with Sinn Féin, if the Irish Republican Party (IRA) has not started to get rid of its guns by July 1. Paisley, however, has accused Trimble and British Prime Minister Tony Blair of breaking their promises to the people of Northern Ireland by allowing into government a party linked to a terrorist group, without prior arms decommissioning.

While Clinton is no longer the most powerful man in the world, his charisma and his past efforts to keep the peace process moving are still appreciated by many. He receives Northern Ireland political leaders countless times at the White House and gives support and encouragement by phone during difficult periods of the peace talks.

Clinton delivers a lecture at Trinity College Dublin and attends a gala for peace and reconciliation at Dublin Castle, before travelling to Derry and then on to Belfast, where he receives an honorary degree from the former peace talks chairman George Mitchell, now chancellor of Queen’s University Belfast.

The leader of the Social Democratic and Labour Party (SDLP), John Hume, who welcomes Clinton to Derry, says the former president has done a great deal of good for all the people of Ireland. But the Democratic Unionist Party (DUP) deputy leader, Peter Robinson, claims that Clinton and Blair could have a negative effect on Trimble’s campaign. “As a unionist, I wouldn’t like to be sitting next to either of them just before an election,” he said. “Blair’s name is associated with the now-broken pledges he wrote on a board here just before the [Good Friday agreement] referendum, so for him to come over and moralise now won’t do much good. And Clinton is so disgraced and powerless that, while he might prop up the nationalist SDLP and Sinn Féin vote, he’ll have no impact on unionists voters.”