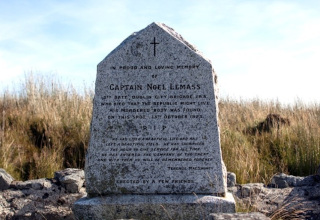 Noel Lemass, Anti-Treaty Irish Republican Army (IRA) officer in Dublin and brother of Seán Lemass, is abducted by Free State plainclothesmen and killed on July 3, 1923. His body is found in the Wicklow Mountains on October 13.

Lemass is a member of the 3rd Battalion, Dublin Brigade of the IRA. He along with his younger brother Seán, later Ireland’s fourth Taoiseach, take part in the Easter Rising where he fights at the General Post Office (GPO). He is employed as an engineer in Dublin Corporation. When the Irish Civil War breaks out in 1922 both he and his brother take the Anti-Treaty side and both fight together at the Four Courts.

After the fall of the Four Courts, Lemass is imprisoned but manages to escape and makes his way to England. He returns to Ireland in the summer of 1923 when the cease-fire has been declared and goes back to his former employers at the Dublin Corporation, hoping to resume his work there. He offers the town clerk, John J. Murphy, if he would forward a letter to the authorities that he plans to write, “stating that he had no intention of armed resistance to the Government.”

In July 1923, two months after the Irish Civil War ends, Lemass is kidnapped in broad daylight by Free State agents outside MacNeils Hardware shop, at the corner of Exchequer and Drury Street. Three months later, on October 13, his decomposed body is found on the Featherbed Mountain near Sally Gap, twenty yards from the Glencree Road, in an area known locally as ‘The Shoots.’

The body is clothed in a dark tweed suit, light shirt, silk socks, spats and a knitted tie. The pockets contain Rosary beads, a watch-glass, a rimless glass, a tobacco pouch and an empty cigarette case. The trousers’ pockets are turned inside out, as if they had been rifled. There is what appears to be an entrance bullet wound on the left temple and the top of the skull is broken, suggesting an exit wound. He has been shot at least three times in the head and his left arm is fractured, his teeth have been brutally forced from his jaws and his right foot is never found. It is likely that he is killed elsewhere and dumped at this spot.

Meeting two days later, Dublin Council passes a strongly worded vote of sympathy with Lemass’s family. Describing their fellow employee as an “esteemed and worthy officer of the Council who had been foully and diabolically murdered,” the Council adjourns for one week as a mark of respect.

(Pictured: Captain Noel Lemass Memorial Stone at the spot where his body was found on Featherbed Mountain)