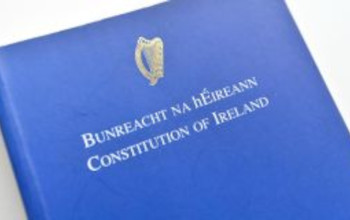 The First Amendment of the Constitution Act 1939 amends the Constitution of Ireland to extend the constitutional definition of “time of war” to include a period during which a war occurs without the state itself being a direct participant. It is introduced and signed into law on September 2, 1939, the day after the Invasion of Poland by Germany and allows the government to exercise emergency powers during World War II, known in Ireland as The Emergency, although the state is neutral.

Article 28.3.3° of the Constitution grants the state sweeping powers during a state of emergency, but in the form in which the article is adopted in 1937, they can be invoked only during a “time of war or armed rebellion.” The First Amendment specifies that “time of war” can include an armed conflict in which the state is not actually taking part.

The amendment is introduced by the Fianna Fáil government of Éamon de Valera on September 2, 1939, and passes swiftly through both houses of the Oireachtas. Unlike later amendments, the First and Second Amendments are not submitted to a referendum because under the terms of Article 51, one of the Transitory Provisions of the Constitution, the Constitution can be amended by a vote of the Oireachtas alone from 1938 to 1941.

Article 28.3.3º is amended on two further occasions. The Second Amendment, passed in 1941, also under Article 51, clarifies that emergency provisions must be within the time of war or armed rebellion itself and add a clause at the end of the last sentence, which specifies that a “time of war” can extend beyond the termination of hostilities. The Twenty-first Amendment, passed in 2001, prohibits the use of the death penalty in a new subsection in Article 15.5.2º, and provides that the emergency provisions of the Constitution cannot be used to allow the death penalty.