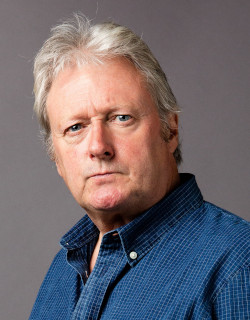 Lawson is raised in a Protestant family and is educated at Campbell College, a grammar school in Belfast. He then trains as an actor at the Guildhall School of Music and Drama in London, where a classmate and good friend of his is fellow Enniskillen native Adrian Dunbar, whom Lawson says is the first Catholic he has ever met.

Lawson appears in at least three films and in at least twenty television productions. He is probably best known for appearing as Jim McDonald in the ITV television soap opera Coronation Street. He first appears as Jim in 1989 and remains a regular character for eleven years, since which time his appearances have been few and far between.

Lawson’s other television work includes appearing as Seamus Duffryn in the 1982 Yorkshire Television thriller miniseries Harry’s Game (also known as Belfast Assassin), and as one of the main characters, Billy, in Mike Leigh‘s television film Four Days in July, both based on The Troubles in Northern Ireland. He plays Trigg in the 1989 television film The Firm and has also appeared in various other television series including Doctors, Bread, The Bill and Rosemary & Thyme.

In 2000, Lawson makes a programme for ITV Granada, Passion for Peace, which follows him back to Northern Ireland and reports on the creation of the Tim Parry Johnathan Ball Peace Centre in Warrington. In 2005 he appears in the TV documentary Titanic: Birth of a Legend. In 2009 he appears alongside an eight-foot Frankfurter sausage in a German television commercial, advertising hot dogs. His overdubbed catchphrase in the commercial is Betrachten Sie die Größe meiner Wurst! (English: “Look at the size of my sausage!”).

In 2010, Lawson reveals that he is returning to Coronation Street for its fiftieth anniversary celebrations. He speculates that bosses may be planning to kill his character off, however, this never happens. He stays until April 2011. He then returns for a three-month stint on the soap between August and November 2014.

In 2015, Lawson makes a guest appearance in an episode of the Comedy Central sitcom Brotherhood as the father of the three main characters. He also appears as Doctor Black in the 2016 BBC Northern Ireland drama My Mother and Other Strangers.

Lawson returns to Coronation Street in September 2018 with his supposed long lost daughter from his relationship with Liz. On October 8, 2018, while portraying Inspector John Rebus in the play Long Shadows in Edinburgh, he suffers a minor stroke on stage, but recovers shortly afterwards.

Lawson lives in Belfast with his partner, Debbie Stanley, having previously lived with her in Chester, Cheshire, for a number of years.