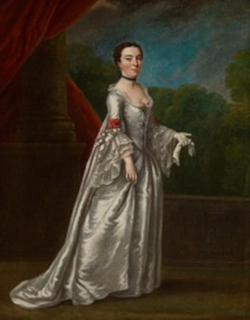 George Anne Bellamy, English actress whose stage career and personal life are, in their irregularity, not entirely atypical of her era, is born in County Fingal on April 23, 1727. Her best performances are in such tragic roles as Desdemona in Othello and Juliet in Romeo and Juliet.

Bellamy is the illegitimate daughter of a Quaker lady who elopes from boarding school with the diplomat James O’Hara, 2nd Baron Tyrawley. She is named George Anne through a mishearing of the name Georgiana at her christening. Though her mother marries a Captain Bellamy in Lisbon, Bellamy is acknowledged by Tyrawley as his daughter and he provides for her needs, including her education at a convent in Boulogne-sur-Mer. While living with her mother in London, she meets the theatrical manager John Rich and other leading stars of the stage, and she soon determines to pursue an acting career.

Bellamy’s early roles at Covent Garden, beginning about 1744, are as Miss Prue in Love for Love and with James Quin in The Orphan. Her reputation as an actress rests largely on her good looks and her “soft” feminine manner. Her career reaches its pinnacle when, in 1750, her performance of Juliet to David Garrick’s Romeo at Theatre Royal, Drury Lane is said to surpass the work of the revered Susannah Cibber in a rival production of the play at Covent Garden.

Riotous living, including a legal and a bigamous marriage, takes its toll on Bellamy’s beauty and her appeal to managers. Her later life is marred by ill health and credit troubles. Her last appearance is at Drury Lane on May 24, 1785 at her own benefit concert. She is unable to act, but speaks briefly to the audience.

In the same year Bellamy publishes “An Apology for the Life of George Anne Bellamy” in six volumes. The salacious work is said to be ghost written by Alexander Bicknell.

George Anne Bellamy dies in poverty on February 16, 1788 in London.