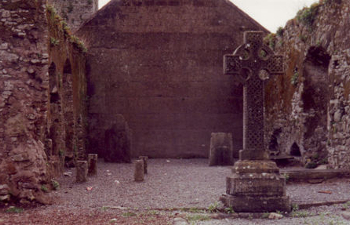 James Cotter the Younger, the son of Sir James Fitz Edmond Cotter who had commanded King James‘s Irish Army forces in the Counties of Cork, Limerick, and Kerry, and Eleanor/Ellen Plunkett, daughter of Matthew, 7th Baron Louth, is executed on May 7, 1720 for high treason in supporting the Jacobite cause. His death is seen by many, especially within the Catholic population of Ireland, as a form of political assassination.

At the time of his death Cotter is seen, like his father before him, as the natural leader of the Catholics of Cork. He is also a prominent patron of poetry and other literature in the Irish language. The Irish text Párliament na mBan or ‘The Parliament of Women’ is dedicated by its author, Domhnall Ó Colmáin,’ to a young James Cotter in 1697. As one of the few major landowners of the Catholic faith remaining in Ireland, and as a man of known Jacobite and Tory sympathies he is distrusted by the authorities. He is also held in suspicion by those of his landed neighbours who are part of the Protestant Ascendancy and of Whiggish political views. Amongst his overt political actions he is believed to play a leading part in the instigation of the election riots of 1713 in Dublin. His trial, ostensibly for rape, is a cause célèbre at the time and widely seen as an example of judicial murder.

Though married, Cotter has a reputation as a ladies’ man. His wealth allows him to flaunt his independence of the Protestant ruling class and anti-Catholic laws of Ireland. These characteristics, allied to his political activities, lead to his downfall. He makes an enemy of a powerful neighbour, Alan Brodrick, 1st Viscount Midleton. Brodrick, it appears, arranges that Cotter be accused of abducting and raping a young Quaker woman named Elizabeth Squibb, reported by some to have been Cotter’s mistress. When news of this trumped-up or exaggerated charge reaches Cork City, the Quakers of the town live in fear of their lives for many weeks. Believing the charge cannot hold up in court, Cotter gives himself up to the Cork sheriff.

The judge presiding on the case is Sir St. John Brodrick who, as a close relative of James Cotter’s accuser, is hardly impartial. The jury has also been packed as all twelve of its members are justices of the peace. The trial takes place in a period of heightened rumour of Jacobite invasion. A large number of arms for cavalry are found in Cork which triggers a scare until it is discovered that they are government owned and intended for a local militia unit. James Cotter is held in jail, though bail has been granted, and is convicted of the crime.

A bizarre element in Cotter’s downfall are the pleas for mercy expressed by both the jury which has convicted him and Elizabeth Squibb, his alleged victim. Attempts to gain a pardon in Dublin are proceeding and a stay of execution is sent, however, the hanging is deliberately brought forward and the stay does not arrive in time. Cotter has attempted to escape and spends the night before his execution in chains. The gallows erected for the execution are destroyed by some of the citizens of Cork and the hanging is extemporised using a rope attached to a metal staple in a vertical post. James Cotter is hanged in Cork City on May 7, 1720. News of his execution triggers widespread riots on a national scale. He is buried in his family’s vault at Carrigtwohill.

Some have seen the death of James Cotter as the working of a family feud. His father had been intimately involved in the assassination of the regicide John Lisle in Switzerland (1664). The wife of the Lord Lieutenant of Ireland at the time of James Cotter’s trial is a granddaughter of John Lisle.

Up to twenty poems in Gaelic survive which reflect the widespread dismay felt at James Cotter’s execution, including ones by Éadbhard de Nógla, son of his close friend, the lawyer Patrick Nagle.