Matt Connor, one of the most legendary Gaelic footballers of all time, is born in Walsh Island, County Offaly, on July 9, 1960. He plays with his local club Walsh Island and is a member of the Offaly senior inter-county team from 1978 until 1984 when he is seriously injured in a car crash, resulting in his needed use of a wheelchair.

In a six-year career with Offaly Connor scores a massive 13-142 and his performance in the 1980 All Ireland Senior Football Championship semi-final against Kerry when he scores 2-9 is regarded as one of the great individual performances.

Connor is a key player on the Offaly side that famously denies Kerry five-in-a-row in 1982 when he is joined by his brother Richie, who captains the side, and by his cousins Liam and Tomas, all from the small Walsh Island club just a couple of miles beyond Portarlington.

Connor is cruelly paralysed from the waist down following a car accident on Christmas Day 1984. He is only 24 years old at the time. Despite having his career cut short by injury, he remains heavily involved in Offaly GAA and serves as minor manager, senior selector and is also involved with the Irish international rules football team.

The Walsh Island native serves in Tullamore Garda station for many years and is remembered as one of the classiest forwards to ever have played the game. He retires following a 40-year career as a member of An Garda Síochána.

The Connor family has a long association with Laois through school, work and football. Connor is a regular in the press box in O’Connor Park which shares a facility with the wheelchair section and the VIP area. His older brother Richie is currently principal of Shanahoe National School and previously served as manager of the Laois and Offaly senior football teams.

In May 2020, the Irish Independent names Connor at number six in its “Top 20 footballers in Ireland over the past 50 years.” 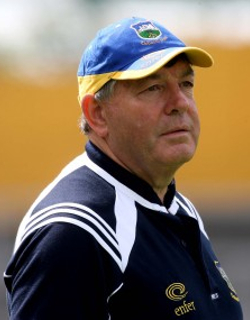 Michael “Babs” Keating, retired hurler and Gaelic footballer who played as a forward for the Tipperary GAA senior teams, is born on April 17, 1944 in Ardfinnan, County Tipperary.

Keating first plays competitive Gaelic games during his schooling at CBS High School Clonmel. He arrives on the inter-county scene at the age of sixteen when he first links up with the Tipperary minor teams in both codes, before later joining the under-21 sides where he heavily practices yoga. He joins the senior football panel during the 1960 All-Ireland Senior Football Championship before being added to the senior hurling panel four years later. Keating is a regular member of the starting fifteen on both teams, and wins two All-Ireland Senior Hurling Championship medals, four Munster Senior Hurling Championship medals and two National Hurling League medals. He is an All-Ireland runner-up on two occasions.

As a member of both Munster GAA inter-provincial teams on a number of occasions, Keating wins a combined total of three Railway Cup medals. At club level he is a five-time Tipperary Senior Football Championship medalist with Ardfinnan. Keating plays his club hurling with Ballybacon-Grange GAA.

Keating is widely regarded as one of the greatest players of his generation. In 1971 he is named on the inaugural All-Star team, while he also collects the Texaco Hurler of the Year award. He is also chosen as one of the 125 greatest hurlers of all-time in a 2009 poll.

In retirement from playing Keating becomes involved in team management and coaching. At various times he serves as manager of the Galway GAA, Offaly GAA and Laois GAA senior teams, however, it is with his own native Tipperary that he enjoys his greatest success, guiding the team to two All-Ireland victories.