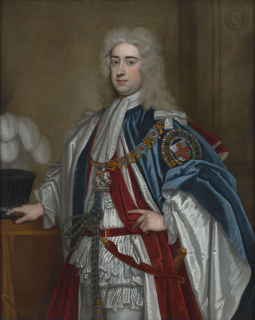 Perhaps because he had been on a previous diplomatic mission to Hanover, Sackville is chosen to inform George I of his accession to the Crown in August 1714. George I initially favours him and numerous offices and honours are given to him: Privy Councillor, Knight of the Garter, Groom of the Stool, Lord Steward, Governor of Dover Castle and Lord Warden of the Cinque Ports. At George I’s coronation he carries the sceptre. At the coronation of George II he is Lord High Steward and carries St. Edward’s Crown. He quarrels with the King in 1717 and is told his services are no longer required, but he is made a Duke three years later.

Sackville serves twice as Lord Lieutenant of Ireland, from 1731 to 1737 and again from 1751 to 1755. In 1739, at the foundation of the Foundling Hospital, he is one of that charity’s original governors. His first term as Lord Lieutenant is uneventful. His second takes place at a time of acute political tension between the two main factions in the Irish Government, one led by Henry Boyle, the Speaker of the Irish House of Commons, the other by George Stone, the Anglican Archbishop of Armagh. Sackville, now heavily influenced by his son George Sackville, makes the mistake of openly backing the Archbishop. He is unable to oust Boyle from power, and is accused of being the Archbishop’s tool. He becomes extremely unpopular, leading to his eventual recall.

Sackville’s last years are uneventful, apart from a riot in 1757 caused by the passage of the Militia Act to raise an army for the Seven Years’ War, in which he narrowly escapes injury. He dies at Knole, a country house in west Kent, on October 9, 1765 and is buried at Withyham in East Sussex. 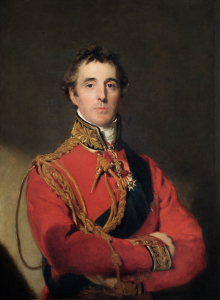 Field Marshal Arthur Wellesley, 1st Duke of Wellington, Anglo-Irish soldier and statesman who was one of the leading military and political figures of 19th-century Britain, dies on September 14, 1852. His defeat of Napoleon at the Battle of Waterloo in 1815 puts him in the first rank of Britain’s military heroes.

Wellesley is born in Dublin, into the Protestant Ascendancy in Ireland. He is commissioned as an ensign in the British Army in 1787, serving in Ireland as aide-de-camp to two successive Lords Lieutenant of Ireland. He is also elected as a Member of Parliament in the Irish House of Commons. He is a colonel by 1796, and sees action in the Netherlands and in India, where he fights in the Fourth Anglo-Mysore War at the Siege of Seringapatam. He is appointed governor of Seringapatam and Mysore in 1799 and, as a newly appointed major-general, wins a decisive victory over the Maratha Confederacy at the Battle of Assaye in 1803.

Wellesley rises to prominence as a general during the Peninsular War of the Napoleonic Wars, and is promoted to the rank of field marshal after leading the allied forces to victory against the First French Empire at the Battle of Vitoria in 1813. Following Napoleon’s exile in 1814, he serves as the ambassador to France and is granted a dukedom. During the Hundred Days in 1815, he commands the allied army which, together with a Prussian army under Gebhard Leberecht von Blücher, defeats Napoleon at Waterloo. Wellesley’s battle record is exemplary and he ultimately participates in some 60 battles during the course of his military career.

Wellesley is famous for his adaptive defensive style of warfare, resulting in several victories against numerically superior forces while minimising his own losses. He is regarded as one of the greatest defensive commanders of all time, and many of his tactics and battle plans are still studied in military academies around the world.

After the end of his active military career, Wellesley returns to politics. He is British prime minister as part of the Tory party from 1828 to 1830, and for a little less than a month in 1834. He oversees the passage of the Roman Catholic Relief Act 1829, but opposes the Reform Act 1832. He continues as one of the leading figures in the House of Lords until his retirement and remains Commander-in-Chief of the British Army until his death.

Wellesley dies at Walmer Castle in Deal, Kent, his residence as Lord Warden of the Cinque Ports, on September 14, 1852. He is found to be unwell on that morning and is aided from his military campaign bed, the same one he used throughout his historic military career, and seated in his chair where he dies. His death is recorded as being due to the aftereffects of a stroke culminating in a series of seizures.

Although in life Wellesley hates travelling by rail, his body is taken by train to London, where he is given a state funeral, one of only a handful of British subjects to be honoured in that way, and the last heraldic state funeral to be held in Britain. The funeral takes place on November 18, 1852. He is buried in a sarcophagus of luxulyanite in St. Paul’s Cathedral next to Horatio Nelson, 1st Viscount Nelson.