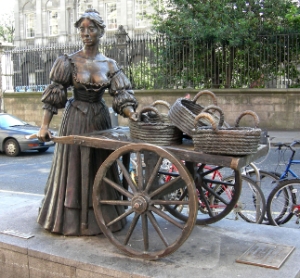 The Dublin Millennium Commission proclaims in 1988 that June 13 is to be designated as “Molly Malone Day.”

Molly Malone is a popular song, set in Dublin, which has become the unofficial anthem of Dublin City. The song tells the fictional tale of a fishmonger who plies her trade on the streets of Dublin, but who dies of a fever at a young age. In the late 20th century a legend grows that there is a historical Molly, who lived in the 17th century. She is typically represented as a hawker by day and part-time prostitute by night. In contrast she has also been portrayed as one of the few chaste female street-hawkers of her day. However, there is no evidence that the song is based on a real woman of the 17th century or any other time for that matter. The name “Molly” originated as a familiar version of the names Mary and Margaret. While many such “Molly” Malones are born in Dublin over the centuries, no evidence connects any of them to the events in the song. Nevertheless, in 1988 the Dublin Millennium Commission endorses claims about a Mary Malone who died on June 13, 1699, and proclaims June 13 to be “Molly Malone Day.”

Artists who have recorded versions of Molly Malone include Heino, U2, The Saturdays, Danny Kaye, Pete Seeger, Frank Harte, Sinéad O’Connor, Johnny Logan, Ian McCulloch, Paul Harrington, and Damien Leith. However, the best-known version is recorded by The Dubliners.

Molly Malone is commemorated in a statue designed by Jeanne Rynhart and unveiled by then Lord Mayor of Dublin, Alderman Ben Briscoe during the 1988 Dublin Millennium celebrations. The statue is presented to the city by Jury’s Hotel Group to mark the Millennium. Originally placed at the bottom of Grafton Street in Dublin, the statue is known colloquially as “The Tart With The Cart,” “The Dish with the Fish,” and “The Trollop With The Scallops.” The statue portrays Molly as a busty young woman in seventeenth-century dress. Her low-cut dress and large breasts were justified on the grounds that as “women breastfed publicly in Molly’s time, breasts were popped out all over the place.”

The statue is later removed and placed in storage to make way for new tracks for Luas, Dublin’s tram/light rail system. On July 18, 2014, it is temporarily placed outside the Dublin Tourist Office on Suffolk Street. The statue is expected to be returned to its original location in late 2017.