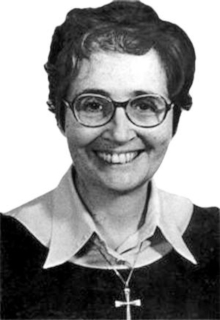 Clarke’s parents, both born in Ireland, settle in Belle Harbor, Queens, New York in the late 1920s. She enters Maryknoll in 1950 and makes her first vows in 1953. Initially, she is attracted to Maryknoll by a deep desire “to become closer to God and to serve Him.”

After graduation from Maryknoll Teachers College in 1954, Sister Clarke is assigned to teach at St. Anthony’s Parish School in The Bronx. In 1959 her growing desire “to serve Him” is further strengthened with her assignment to Siuna, Nicaragua, as a teacher and then superior of the little community. She is in Managua from 1970 to 1976 where she ministers to the people, sharing with them in the cataclysmic earthquake of 1972. With them she works tirelessly, helping them rebuild their homes and establish basic Christian communities.

In 1977 Sister Clarke returns to the Center to serve on a Maryknoll Sisters World Awareness Team, working primarily along the East Coast of the United States. She is the same everywhere she serves – friendly, loving, generous, gentle, using her gifts and abilities tirelessly, and trusting that with God’s help she can do what is needed. When her term with the World Awareness Team ends early in 1980, she decides to return to Nicaragua.

In August 1980 emergency needs in El Salvador call Sister Clarke and she spends her first weeks there in Santa Ana. However, after Sister Carol Piette’s death, she volunteers immediately to accompany Sister Ita Ford in Chalatenango to minister to the poor and oppressed and the imprisoned.

When Sister Clarke comes to the Regional Assembly the day before Thanksgiving, November 26, 1980, she feels not only willing to return to El Salvador, but convinced that Chalatenango is the place where she can and will serve Christ’s poor. With Sister Ford she searches out the missing, prays with the families of prisoners, buries the dead, and works with the people in their struggle to break out of the bonds of oppression, poverty, and violence. Their days are filled with difficulty and fearful danger at times.

Sister Clarke returns with Sister Ford to El Salvador late in the afternoon of December 2, 1980. Two of their good friends and collaborators in mission meet them at the airport to take them back to Chalatenango. A few hours later she is beaten, raped, and murdered along with three fellow missionaries — Sister Ita Ford, Sister Dorothy Kazel and missionary Jean Donovan — by members of the military of El Salvador. She is buried in Chalatenango, El Salvador.